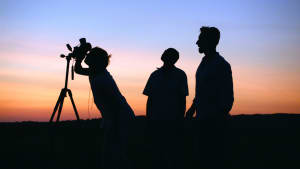 Tourism Australia and Visa have announced a three year partnership to promote Australia as a “must-see” destination for the next wave of travellers: independent, sophisticated millennials.

The tie up will see Tourism Australia leverage Visa's Cross Border campaign '#notatourist' to promote the core message of its positioning, that “There's Nothing Like Australia” across the Asia Pacific region. The work will promote Australia's food and wine along with coast and aquatic experiences with the aim of turning interest into bottom-line expenditure.

Tourism Australia MD John O'Sullivan said the campaign will start in China with the aim of targeting the “free and independent” millennial traveller; a segment that the organisation hasn’t typically targeted.

“They are the next wave of traveller that are coming through and they're highly independent, high inquisitive, very savvy and sophisticated,” O’Sullivan said.

“We know a lot of them have education experience in Australia – so they know their destination. So really its an opportunity to appeal to that target market using a campaign that is really defined, through its media channels, but also through its user generated content and the viral assets that we'll build around it.”

O'Sullivan said the Visa campaign also ties into the Tourism Australia positioning which promotes an “experience” view of Australia, with a focus on the unique and money-can't buy moments, instead of pushing sightseeing.

It also ties into Tourism Australia's focus on digital and user-generated elements, which has seen the brand consistently top ranked in terms of Facebook fans.

O'Sullivan said the business has a saying that “no one tells a story better about Australia than an Australian or someone who has visited Australia.”

“What we really like about Visa's “not a tourist” campaign is that it delves into experiences and international travellers behaving like locals,” O'Sullivan said.

“That's really at the core of what we're seeing in our research which is that international travellers, particularly millennial, are really looking for experiences which are unique.

“By casting the net wide and allowing people to tell us their stories, we think that is a more effective way of marketing the country overall but to also bring to live these experiences that we know travellers are really looking at.”

“So a key part of these new arrangement that we're starting to strike is the ability to tap into their insights their data about their customers who are coming to Australia: what their preferences are, what they're spending on, what they're not spending on,” O'Sullivan.

“Then we can define and work with the industry, and give them a better overview of the product and experiences that we need to be ashing more broadly.”