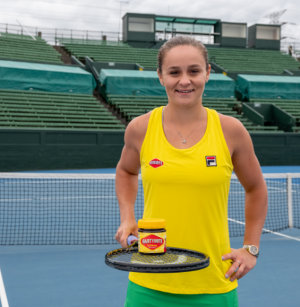 Vegemite has announced it will continue sponsorship of world number one tennis player, Australia’s Ashleigh Barty.

“Ash is an extraordinary ambassador – she’s universally loved by all Aussies and we can’t wait to cheer her on as we approach the summer tennis season," Gray says.

Barty will wear the iconic Vegemite patch throughout the Australian summer season, starting with the Fed Cup Final in November.

Barty says she is excited about her ever-strengthening partnership with her favourite food.

“I’m a proud Vegemite kid and I couldn’t be happier to be continuing this relationship,” Barty says,

“Vegemite is a reminder of home while I’m travelling, and I always take a tube with me around the world. The chance to work with one of Australia’s most iconic brands for the third year is a dream come true.”

To celebrate the continued partnership, Vegemite will be releasing limited-edition ‘Bartymite’ Vegemite jars.

“Vegemite fans, be rest assured, there will be no change to the taste of the product – the recipe you know, and love remains the same," Gray says.

The limited-edition 380g ‘Bartymite’ jars will be available from mid-month until they’re sold out.