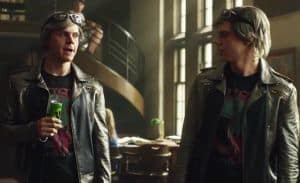 V Energy's “massive hit that improves you a bit” campaign has recieved the Hollywood treatment, with the latest iteration of the Aussie Grown ad now staring X-Men's famed character Quicksilver.

The creative has been running for the past two years, and to coincide with the launch of the latest Marvel film, X-Men: Apocalypse, this is the first time the brand has incorporated a famous character into the positioning.

The cast and crew of the latest X-Men film collaborated with V's parent company, Frucor, in Canada to film the ad. With the help of its agency, Clemenger, V Energy produced a 30 second TV ad featuring X-Men actor Evan Peters.

V Energy's marketing manager, Craig Harkness, told AdNews that while this is the brand's third partnership with Marvel, this is the first time there's been this level of integration between the two businesses.

“This is something that we've never done,” Harkness says. “I can't think of any other brands in Australia that have done something like this with a global celebrity who is intertwined with the brand ad.

“It's the exact same structure as Viking or Fantastic Man. It's not just a character showing up, and walking off out of an ad, [Evan Peters] is the protagonist of this massive ad and it's what makes it very special.”

Harkness explained this is one of the biggest marketing pushes the brand has ever done, telling AdNews it's roughly a $6 million investment for the brand across all platforms. As well as the ad, the campaign will include V Energy pack promotion and executions across Facebook to ensure there is mass awareness.

Harkness says that brands don't utilise partnerships very well in Australia, with more brands opting to get involved with “known quantities” such as sport.

“With franchises some people may be nervous about partnering with a movie,” he says. “But if you do it with tried and tested franchises like X-Men or The Avengers, you end up with a bit of security, and those films are always so well made that they're not going to be a bad refection on the brand in anyway. You're going to get longevity out of it,” he added.

When it comes to getting brand cut through with its “massive hit that improves you a bit” spots, Harkness says this line really differentiates the brand in market because it takes itself less seriously than its key competitors.

“Every other energy drink brand promotes extreme performance, extreme energy or extremisms of some kind,” he says.“The mother of all energy hits” from Mother and Red Bull is about flying over the Arc De Triomphe or jumping out of space.

“We are being honest around the category and saying we know we're not going to make you leap out of space, we're just saying we know all we're going to do is get you through the day with the kick that you need, and it's been proven now by our latest Millward Brown scores, we're standing for something that is resonating with people.”

X-Men: Apocalypse will be in Australian cinemas on 19 May, with the ad hitting cinemas, TV, social media and pre-rolls from today (28 April).