Frucor's V and Fox partner on The Wolverine 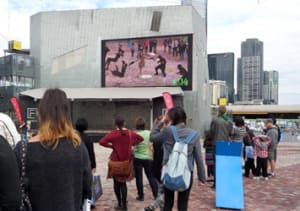 V and The Wolverine augmented reality experience at Federation Square.

Frucor’s V Energy and 20th Century Fox teamed up on a joint campaign leveraging the release of The Wolverine to promote V’s new Graphite drink.

The campaign, developed by Soap Creative, ran over eight weeks with executions across digital, cinema, point-of-sale, sampling and experiential.

A centrepiece of the campaign was an augmented reality experience at Melbourne’s Federation Square which challenged people to a battle against ninja characters co-opted from The Wolverine. Players with the highest scores won prizes and the videos were shared to social media platforms.

A 'Tokyo Fury' online game was been visited by 4.4 million visitors.

“The team at Soap built an integrated campaign which perfectly captured the energy of the V brand along with the bold and potent nature of The Wolverine,” said V Energy brand manager Angelica Scibilio. “Merging multiple consumer touch points, heroing digital and creating a feature experience through the augmented reality event has enabled us to build an engaging platform from which we could excite and empower our consumers around the launch of our new product.”

Soap executive creative director Brad Eldridge said: “The campaign allowed us to flex our ninja-like strategic skills to create an integrated strategy – grounded in digital, yet supported by traditional channels such as point-of-sale, cinema and sampling.”

20th Century Fox and Soap also worked with Wrigley on a joint promotion between The Wolverine and 5 Adamantium gum.