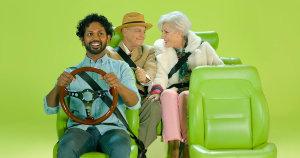 Ola ad features a diverse cast of passengers and drivers

Ride-sharing service Ola has launched its first Australian campaign as it ramps up marketing efforts in the region.

Ola, which is Uber's key rival in India, launched in Melbourne in January this year, quickly expanding into Sydney, Perth, Canberra, Adelaide and the Gold Coast.

The campaign, created by The Royals after winning the account this year, looks to differentiate Ola from competitors like Uber, Taxify and Didi in the competitive ride-sharing sector.

As part of the campaign, six and 15-second bumper ads are running on YouTube and outdoor ads are posted across Sydney and Melbourne.

The short ad features a diverse cast of drivers and passengers and introduces the tagline: 'The rideshare that cares how you get there'.

A sample of the outdoor work seems to take a subtle dig at Uber, which has faced scrunity for not paying its drivers sufficiently, with it reading: 'Ola believes fair's fair. That's why more of your fare goes to the driver'. Ola claims to charge lower commission rates for drivers, with a starting rate of 7.5%.

Ola managing director Simon Smith, who was previously the CEO of eBay Australia, has outlined his intentions for Ola to rapidly expand across Australia and challenge the market share currently held by Uber and Taxify - the two largest in the sector.

It recently hit a milestone in Australia, racking up 1.5 million rides in Australia and with 40,000 Australian driver partners on its books. Globally, it has more than 125 million users.

A sample of the outdoor work running across Sydney and Melbourne