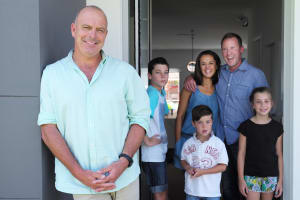 UBank has taken an unusual step in its approach to rebranding, aiming to own a more realistic messaging around the realities of home ownership.

The NAB-owned brand unveiled a new tag line this week of “Just the Bank You need” which CMO Jo Kelly tells AdNews will inform the way it approaches the market going forward: encouraging consumers to borrow less and live more.

Kelly says that for too long consumers have been looking at the “Great Australian Dream” of home ownership that their parents and grandparents enjoyed, despite the market making it out of reach for most.

“There is a conversation that needs to be opened up in Australia around the 'Great Australian Dream' of home ownership,” Kelly says.

“We don't want to be the naysayers that go out and say 'don’t have those things' but we want to say 'be realistic about it, re-frame it and think about other ways to achieve it'.”

While Kelly admits the change is unusual for a banking institute, she says the company is riding a zeitgeist in culture on de-cluttering, made popular by Marie Kondo.

To communicate this new messaging, UBank has embarked on a major content campaign centred around a television documentary, created by its creative agency The Monkeys and Bombora Productions.

The documentary, named 'All I Need', is hosted by Andrew Daddo and follows two Australian households, in polar-opposite financial situations and will challenge them to re-assess how far they have stretched themselves financially in mistaking what they want with what they need.

Kelly says the content push is a first for the brand, and is not only topical for viewers, but aims to get consumers to engage with their finances.

In addition, UBank has created an online content hub - the All I Need Project - which will have snippets of the documentary and other content that will be feed through it.

“[The hub] will be where we produce interviews with experts and it will be where it becomes much more practical for consumers,” Kelly says.

“That's the starting point for what we see as a huge rich bed of content, some of which we will be producing ourselves; we will be writing content and will be bringing in experts and talking to them. But it's a huge platform to build on.”

Ubank, is a digital brand and has no branches that ensures it has few costs which it can then pass on to customers as part of its value proposition.

Kelly says for this reason most of its campaigns have largely shunned big traditional platforms like television commercials in favour of digital elements. The rebrand will be largely the same, with all content from The Monkeys, PR work from Pulse and indentity, website and customer experience from Maud. Media for the campaign was done by Bohemia.

The documentary will air at 7.30pm on Friday 5 February on 7Two.