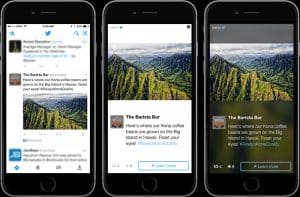 Twitter is opening up its mobile advertising network to all advertisers in a bid to get more using the platform and as a way to generate more revenue for the social media player.

In a global move, Twitter is revamping its Publisher Network and not only is it getting a new name, but it's also getting new features, which aim to up the scale and remove barriers to advertisers wanting to make the most out of mobile devices and the social network.

The new offering is called Twitter Audience Platform, and as part of the move, the social network is now looking beyond just driving mobile app installs and re-engagements by offering advertisers the ability to drive additional objectives with the platform, such as engagement and video views. The business is also launching new creative formats to help advertisers better engage with an in-app audience.

Speaking to AdNews about the rollout, sales director for Twitter Australia, Angus Keene, said the main driver of Audience Platform was to remove the barriers and complexities around running mobile campaigns.

“Advertisers who are running a promoted tweet campaign with us, just simply click one button within our ads platform and our system does the rest. It removes some of the complexities around creating new creative for campaigns – that's the opportunity for brands to work specially with us on the Twitter Audience Platform,” Keene said.

By clicking that one button, the promoted tweet will be sent across the MoPub mobile app network, which Twitter bought in 2013, as a way for the business to up its mobile advertising and to get ads into mobile apps. “There's a huge revenue opportunity for mobile specifically.

Advertisers Toyota, Virgin Mobile and Transport Accident Commission Victoria were involved in a trial of the new offering and all saw an uplift in engagement and a lowering of cost per engagement, Twitter claimed. During the beta phase of Audience Platform, Virgin Mobile achieved a 2.72% lift in engagement rates, which is 10 times higher than the telecommunications industry average and a CPE of five cents.

A version of this story originally appeared in the latest issue of AdNews Magazine (21 August). You can get it hot of the presses here.