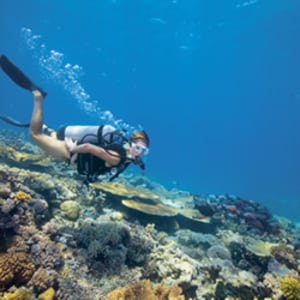 Tourism Australia has tipped more than $1.5 million into a partnership which will net the authority a documentary series on the Great Barrier Reef and a raft of digital assets it can use in future promotion.

This morning it announced that it had teamed up with Atlantic Productions to bring David Attenborough to Australia to produce a documentary series on the reef.

The tourism body has spent an initial $1.5 million on the deal, with the series to air next year. It has also flagged an increased spend to help with the marketing of the series, which should go into more than 130 countries.

As part of the deal, Atlantic will also produce a set of digital assets around the reef which will help it “go beyond a documentary series”.

While Atlantic is keeping mum on what digital content it is producing as part of the push, AdNews understands this could include 3D footage of the reef.

Tourism Australia told AdNews this morning that while the digital content would form an extension on the documentary series, it is looking at using some of the content produced as part of future marketing efforts.

However, the exact details of the content-sharing deal have yet to be ironed out.

Its managing director, John O'Sullivan, said it was a coup to secure Attenborough.

“It’s wonderful to welcome David back to the reef where he will, once again, bring to life the many amazing stories of this magnificent natural wonder in his own unique and inimitable way,” O'Sullivan said.

“David Attenborough is one of the world’s greatest presenters of natural history content, and the Great Barrier Reef is arguably the world’s most recognised natural wonder. We couldn’t ask for a better match,” O’Sullivan said.