Too wicked: Wicked Campers ruled against by ad watchdog 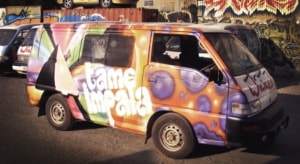 No stranger to controversy, Wicked Campers has once again been slammed by the advertising watchdog for having sexually explicit slogans plastered on its vans. The Advertising Standards Bureau (ASB) has upheld two separate complaints against the company for showing content inappropriate for a mobile van.

One van which the ASB took issue with features the text, “a blow job a day beats an apple”. Those who complained about the ad took offence to the sexually explicit which is inappropriate for broad public viewing.

The ASB agreed noting " that the inclusion of this slogan on a van had no relevance to the nature of the business which is to hire vans for travel and that in this way, the slogan is completely out of context and is sexually explicit."

The ASB upheld the complaint for sexually explicit content however disagreed that the slogan was suggestive of rape or violence.

In its ruling it said: "the complainants concerns that the advertisement is implying sexual violence by suggesting that camouflage should be used so that a female won’t be aware of a sexual encounter. The Board noted that this was an interpretation that was unlikely to be shared by the broader community and considered that the slogan was not suggestive of rape or a violent sexual act."

The ASB noted that in both cases, Wicked Campers failed to respond to the complaints. It's not the first time the company has turned it's nose up at responding to case determinations.

AdNews reported in 2013 that the company, which is a regular on the ASB complaint circuit, was ignoring demands from the watchdog for standard breaches. Other determinations by the ASB against Wicked Campers were over slogans which included "I'm straight, don't rear end me" and ”If you’ve ever met a woman with crooked teeth, you’ve met a woman who has given Chuck Norris a blow job”.