There's an overblown sense of negativity in this industry - Julian Clarke 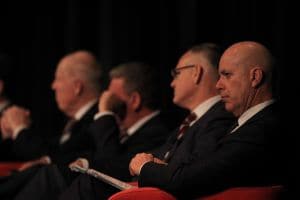 Outgoing chief executive of News Corp Australia, Julian Clarke, has called out the negativity in the newspaper industry saying the source of such negativity largely comes from the publishers.

“If I can make one point, there’s an overblown sense of negativity in our industry and it's almost always created internally,” he said.

“When you look at the fact that this industry has been hit earlier and harder than anyone else by the destructive nature of the digital world, the irony of that is the digital world is what is our salvation. There’s so much that’s been achieved in a very short amount of time. I, at the end of my career, think it’s an exciting time to get involved."

Before taking up the role at APN, Davis was boss of its radio arm ARN, and he said that while radio had not got everything right, one thing it had always done well was collaborating on important issues.

He pointed out radio had been equally as disrupted by the likes of podcasts, but added that radio bosses were able to come together and discuss the big industry issues.

“Outside of the boardroom, we fight and we scrap and we talk revenue, but what I’ve found about the [radio] industry is when the boardroom doors are closed we put our differences aside and we do what’s best for the industry," Davis said.

Hywood used a similar example, referencing the recent defamation case against Fairfax Media by treasurer Joe Hockey. He questioned why the publisher's competition used the case as a way to attack the publisher rather than supporting newspapers as a whole.

“We got ourselves past that, and now we’re starting to attack each other on each other's relative quality. If there's a story that one publisher gets and the other publisher says that’s not a story and tries to undermine the credibility of that story...

“We all have a common interest in defamation law. Now if someone sues us, the other publishers pile in and support the person who sues us; what’s with that?”

It’s not just publisher infighting that needs to stop. Miller explained publishers also need to stop giving in to the big guys and "play" differently.

“We are targeting Facebook and Google - they’re all targeting us - we need to stop playing defence and play attack,” Miller said.

“There are opportunities. We talk about our content, it’s not just our ability to create great content, it’s branded content. We are in a unique position to be able to distribute that content properly and that is a unique difference that we have.

“…They’re [Google, Facebook] taking it from others, but we are creating content tailored to the client's needs.”