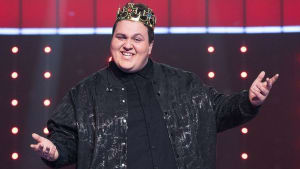 The Voice grand final was split into three separate shows last night by ratings body OzTam, with the 'Winner Announced' part being the most watched for Sunday night.

The Voice series as a whole averaged 1.05m overnight viewers, down 11% compared with the 2016 series average which had an average of 1.18m. The grand final episode was down 60% from season one in 2012.

The grand final show drew in some controversy as Katy Perry's 'live' performance was debunked when the singer was photographed at Sydney Airport getting on a flight at the time of the broadcast.

In a statement from Nine, a spokesperson says: “There are instances where we have to pre-record a performance just prior to the broadcast because of the demands of staging.

“The production complexities of performances like Katy's means sets can't always be struck and re-set during the time allowed by a commercial break.”

Seven News came in at second spot in the top 20 programs for the night, with an average metro audience of 1.306m.

Ten's MasterChef's Sunday night episode, which featured contestants heading to Tokyo to cook on a rooftop, came in at eighth in the top 20 shows and had an average metro audience of 780,000.

Seven's House Rules came in sixth place for the night, drawing in an average metro audience of 1.009m.

Check out the top 20 shows here:

The network also pulled in the highest audience for the week in terms of channel share, with 38.1% audience, followed by Nine with a 36% and Ten with 25.9% of audience.

All three channels pulled in relatively similar audiences from Monday through to Thursday, however Seven's popularity spiked over the weekend, holding roughly 22% of audiences on Thursday to 29% on Saturday.

Meanwhile Ten's share dropped dramatically from Thursday to Saturday night, plummeting from roughly 21% on Thursday to 10% on Saturday. Nine's share remained steady throughout the week.