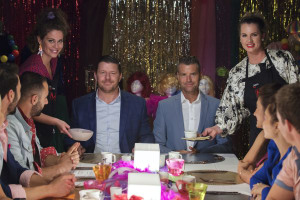 My Kitchen Rules has taken out the top spot in all key demographics overnight, drawing in 1.28 million viewers as the fallout from last week's 'scandal' was shown.

Since returning after the Commonwealth Games, the show has continued to draw in audiences of over one million a night, with drama surrounding contestants Sonja and Hadil, who have been booted from the show.

Last night, judges Manu Feildel and Pete Evans stated that the two contestants would not be returning to the show, following their outbursts against fellow contestants Jess and Emma.

"We had to end Sonya and Hadil's involvement in the competition" 😱😱 #MKR pic.twitter.com/jNK1dGEi8f

Nine's The Voice also continued to perform well in the ratings, drawing in its highest audience to date with 1.10 million viewers.

Ten's Bachelor in Paradise was impacted slightly by both Nine and Seven's strong primetime performances, with the show drawing an audience of 669,000.

Flo, who last week was embroiled in a scandal of her own with the Daily Mail which slammed her as a 'vapid c*nt', was revealed to be the last contestant to enter paradise.

The decision caused the departure of on again, off again 'villain' Leah to depart the show.

MKR, The Voice and Bachelor in Paradise all go head-to-head once again this evening.

Below is a breakdown of last week's TV ratings performances, supplied by Nine, covering all the key demos in the commercial share