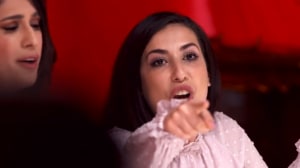 Seven continues its winning streak in the ratings race, with last night's episode of My Kitchen Rules taking out the top spot in all key demos.

The anticipated 'MKR scandal' aired last night to a metro audience of 1.6 million and a national audience of 2.4 million.

The episode, which had been teased throughout the Commonwealth Games, saw contestants Sonya and Hadil 'excused' from the table following a tirade on fellow contestants Jess and Emma.

Viewers were split in their reactions to the episode, some took fire at Seven for “celebrating” bullying on national TV, while others were simply left shocked by the contestants' behaviour.

Jesus, Sonya and Hadil are just so horrifically nasty. #mkr

Apparently what was on #MKR last night wasn't even the worst of it. Wow. I have said for the past two seasons that My Kitchen Rules has a culture that sees bullying go on without punishment (until last night) and look what happens, we get disgusting behaviour.

can i just say i will be very disappointed if it’s not Sonya and Hadil that get kicked out after how they do and have acted. someone needs to put them in their place and looks like it has to be Manu... #MKR

#SonyaHadil should be ashamed! Please don't let them back on #mkr, what a disgrace!

Seven attempted to use the rating success of MKR to boost the premiere of it's latest dating show, Back with the Ex, which aired directly after the cooking program at 9pm.

The show, which follows four couples who have been reunited following a break up, drew in a metro audience of 449,000.

Ten's The Bachelor in Paradise dipped slightly in its ratings as a result, drawing in an audience of 630,000.

Last night's episode saw the return of Thomas, who had been booted from Paradise in his first episode.

The episode featured Thomas on a date with bisexual contestant Megan Marx and drew fire from multiple news outlets, with Ten accused of using 'queerbaiting' in its promos.

Nine's The Voice did not air overnight, instead the network aired Elton John: I'm Still Standing – A Grammy Salute, which drew in an audience of 542,000.

MKR, The Voice and Bachelor are all set to return on Sunday, with the fallout of the 'MKR scandal' expected to be revealed.