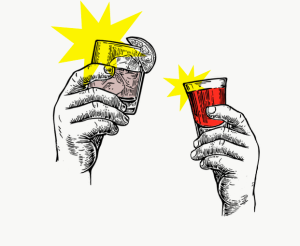 French beverage company Pernod Ricard's lead performance marketer Evan Huggins admits while the brand may be data poor when it comes to consumer transaction data, it's data rich when it comes to interactions from an advertising perspective.

Speaking to AdNews, New York-based Huggins, who also previously worked at Havas in business data intelligence, says like many brand owners, Pernod Ricard is at the at the beginning of its digital transformation journey.

“We're chasing ROI - that's like the holy grail,” Huggins says. “There's a lot of data pieces between where we are now, and getting there, that we have to take care of before we can get to that point.”

Huggins says the ultimate goal is to know how its advertising, at a granular level, influences transactions at the individual consumer level – which is what every company wants. But as its products are owned by different brand companies, such as Chivas Brothers, Irish Distillers or Absolut, and all have their own research teams, websites, IT systems, supply chain as well as totally different consumers.

“Are there synergies? Of course. Do we have the scale to identify them right now? Not quite,” he says.

“Our priority is creating more one-to-one consumer marketing - personalising an experience across touchpoints with the brand. That's the priority.”

He says theoretically it’s about the business using its own data to get more share of the category.

“It’s about getting that a relationship between us and them and then looking at how we marry that with brand story-telling, so we can encourage consumers to connect our products together.”

The world’s second-largest wine and spirits seller, which owns more than 40 brands such as Absolut vodka, Jacob's Creek wine, Jameson Irish Whiskey, Kahlúa liqueur, Malibu rum and Beefeater gin, as well as nine separate subsidiaries, is in the early throws of working with Salesforce in the US as it attempts to dissect and act upon the data it has.

One of the first things the business is looking at in the US is tapping into the marketing cloud to help consolidate consumer data.

“Consumer data is broad, it means a lot of things and it can live in a lot of different places. But we leverage it at a certain level and then orchestrate how we activate it. Those are the two things that the marketing cloud does well and that's what we really utilise it for,” Huggins said.

The brand has also just activated a data management platform (DMP) and attribution “is a whole other thing” it's hoping to crack.

“We're on that attribution path, but the first thing you need to do is get a sense of all of your data sets internally,” Huggins says.

“The DMP is just like icing on the cake because now that houses the anonymous cookies, and the device IDs that we use. It's an exciting time,” he said.

This involves getting to grips with the vast amount of data it has, accepting the data it doesn't have, and working around this to ultimately improve its return on investment (ROI).

“We are positioning data to be the focus of all advertising,” he says.

If the brands, subsidiaries, B2C and B2B categories weren’t enough to de-tangle, state by state there are also different rules when it comes to selling alcohol in the US, which adds complexity.

“Prohibition kind of decentralised that - there's no broad governing body about how booze can be sold except that we can't sell it directly,” Huggins says.

He says while there are some data sets, such as loyalty cards, in the transaction level space, that it can model ROI on, that is clearly not possible in the liquor store on the corner which has a cash paper register and doesn't even give receipts.

“The data we can get is more about the frequency of transactions between the distributor and the retailer,” he says.

But in a world where personalisation and more one-to-one consumer reach tactics are being pushed by brands, this leaves Pernod Ricard out in the cold when it comes to data on transactions and consumer behaviour.

“That's where advertising comes in”, says Huggins (below). 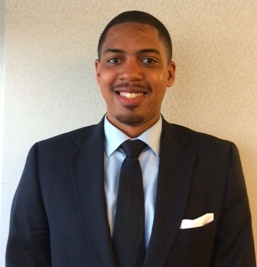 “So the end game for us is how do we leverage the consumer interaction data sets here, to push audiences of people who we've identified through analysis, who are more likely to convert on an offer, or to transact on a particular brand, or the brand of a competitor, to a point where they can do that?

“An example is if we partner with a retailer who sells our booze and we know people are clicking on our ads, we need to push them to a place where they can transact. But we need to partner with them at the end point to get visibility to have that performance."

The wild ride of digital transformation

Huggins describes Pernod Ricard's digital transformation as a “big wild time” and that the people change management side of the shift can’t be underestimated.

“We've needed to build a team so that we can have more narrative internally to grow the appetite,” he says.

Huggins says the brand may not be as far ahead as he’d like it to be within its digital transformation journey, but from what he has seen so far there is a “tremendous appetite to move increasingly in that direction”.

“It's one of those things that people don't fully accept what they don't understand. But once they understand it, there's a ravenous appetite for it,” he says.

Pernod Ricard's model is based on four 'Essentials' – the group’s fundamentals – on which the four growth Accelerators rest: 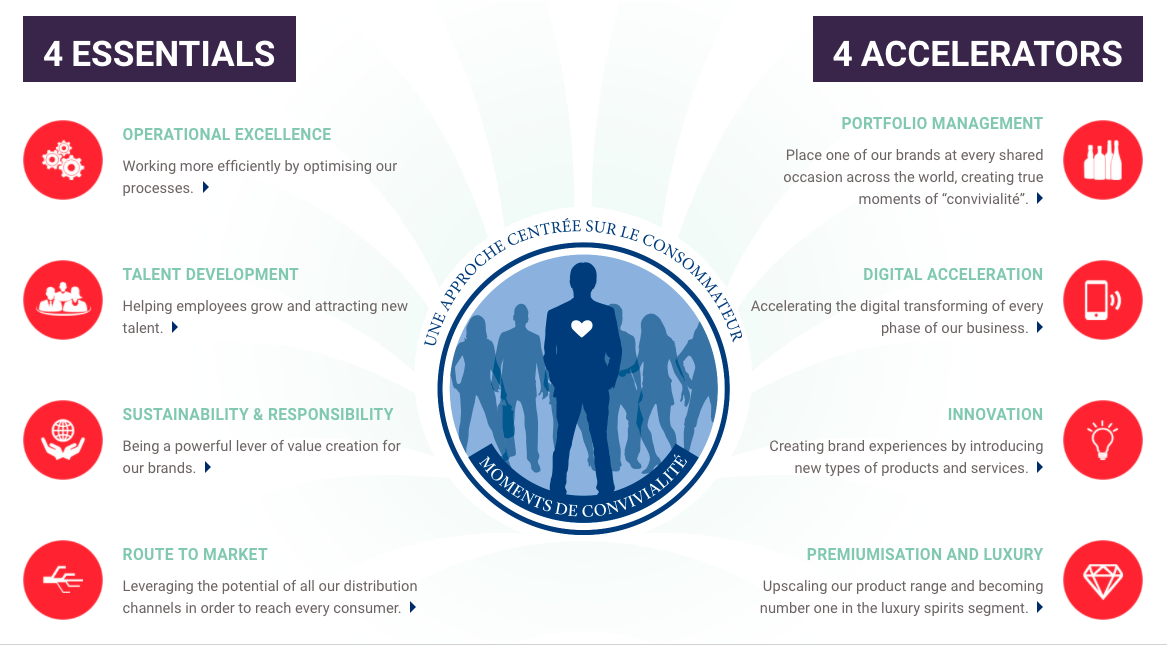 In Australia, Pernod Ricard works with Adobe, suggesting no global strategy of alliance to Salesforce. In 2016 the distilled beverages brand, which sat with Dentsu Aegis-owned media agency Vizeum, revealed it would be moving to TubeMogul’s platform (now Adobe Ad Cloud) to plan, buy, measure and optimise its Australian brand advertising - with the view to move everything in-house.

The shift in advertisers working directly with ad tech platforms has grown in recent times as marketers increasingly crave deeper transparency and more direct control.  While Huggins focuses on the US alone, his advice to others who are about to get under the hood of their businesses, or who are in the early stages of digital transformation, is to focus on 'business outcomes' first and foremost.

“Your business model still exists. That hasn't changed. Maybe it will, depending on your company, but for us booze is not changing. Ultimately it’s how can all this stuff that we're doing help bottles sell quicker and more efficiently? If we can't talk to the CEO about that, none of it matters - forget about it.

He says “you've got to have that story down and senior leadership has got to buy it”, then you get to more of the middle management layer and the people narrative, as ultimately people want to know what is in it for them.

For that part, he says you've got to help them understand how this is going to help make their job easier and make them more successful as otherwise “it sounds like a threat to a lot of people”.

“This is something they don't understand. It's new and people will say ‘we've done it this way for so long, why do we need to do it differently?’” he explains.

“The truth is we have to do it differently because consumers are expecting more from their experiences with companies, like Amazon's one-click to buy function. Can you one buy and click booze at scale? No.”

Making sure stakeholders understand what is in it for them is vital as Huggins says they're the ones that are going to make it happen.

“Stakeholder alignment is the biggest challenge. Without that nothing will happen, and, with that, everything can."