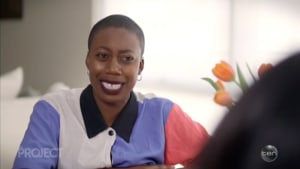 Ten's current affairs show The Project has taken aim at a controversial anti-marriage equality commercial, spoofing the ad in a skit.

Co-host Peter Helliar introduced the spot on last night’s episode, saying he "got hold of the raw tapes of those candid conversations" featured in the official ad.

The Project's version of the ad essentially intercuts the ‘No Mums’ with footage of regular mothers questioning what is being said.

"It's amazing what ends up on the cutting room floor," he told viewers.

The video features women calling "bullshit" on a number of claims made by mothers in the original ad, including the idea that school classes on gay relationships have become "compulsory" in countries where same-sex marriage laws have passed.

"Where? North Korea? Have you checked Snopes, 'cause that sounds like bullshit," one women says in counter.

"Kids in year seven have been asked to role-play being in a same-sex relationship," another line from the original ad claims.

"Was it a school play of Brokeback Mountain?" the skit jokes.

"That's a huge ask to expect anyone to top Heath Ledger's performance."

The Project's video went viral overnight, having been viewed nearly 250,000 times on Facebook and counting.

Last night Equality Campaign, the organisation behind the ‘Yes’ movement, challenged the ‘No' advertisement's claims with its own TV ad. The ad described the claims made in the 'No' ad as "dishonest" and "misleading". Watch it here.