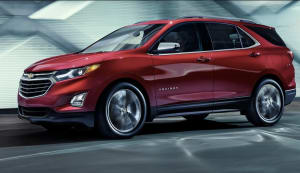 Holden's new SUV will be modelled on this year's Chevrolet Equinox.

The pitch process for the Holden Equinox was whittled down to two last week, with Holden director of marketing and customer experience Mark Harland telling an audience at the AdNews Media+ Marketing Summit in Melbourne that whoever could nail the brief of ‘car marketing to women’ would win the business.

The Monkeys and Publicis Worldwide were left in the running after strong contenders AJF Partnership and newly launched Thinkerbell slid out of the race. AJF is stil Holden’s agency of record despite not winning this specific project.

Speaking to AdNews, Harland said the final two agencies “both were really hungry” and that Publicis “did themselves proud with a fantastic pitch”.

“It was no slam dunk; this was a really tough decision”, he said, adding that The Monkeys had that extra bit of insight that tipped the decision.

It’s thought the new car model rolls out in September, leaving a tight turnaround for a campaign. Most likely a pre-campaign teaser may spill out next month ahead of a much bigger ad launch in November.