The Bulletin: Can you dig it? Cannes launches "Glass Lion"; 40 Years of the ASB 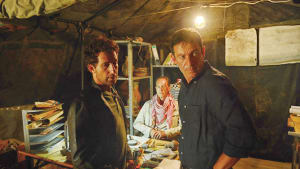 Can you dig it?

Subscription video on demand platform Stan will bring DIG to Australian audiences, with SBS to pick up the free-to-air rights on the anticipated murder-mystery series.

The series is set in modern Jerusalem, and is produced by the same team being Homeland and Heroes.

The series will first appear on Stan on 6 March, and then every Friday thereafter, fast-tracked from the US. It will then appear on SBS from May, with catch-up offered on SBS On Demand.

Cannes Lions has announced its newest award, the “Glass Lion” which will award highly creative work which challenges gender representation.

The award, created with the support of Lean In, aims to reward creative work that “shatters gender stereotypes and breaks through prejudice and inequality”.

Lions Festivals CEO Philip Thomas said: “Creativity has the power to change culture, and the wider world, in a deeply positive way. So rewarding creative work that fights to address the (mis)representation of gender in marketing communication is something we hope will lead to real change across the industry and society.”

The announcement follows a recent award win in the Young Glory competition by DDB Sydney for pitching a “Cannes Lioness” award to challenge the “sex sells” mentality which exists in the industry.

The Advertising Standards Bureau (ASB) has celebrated 40 years of advertising self-regulation in Australia.

Looking at what has changed in community views over the time, the ASB noted it still continues to receive a large number of complaints about the "ick factor" in adverts - nose picking, passing wind or affairs - with 16.6% of complaints in 2014 broadly sitting in this category.

When it comes to self regualtion ASB CEO Fiona Jolly said the watchdog's board is made up of community members which ensures current community values are maintained.

“The system works because of the commitment of the advertising industry to keep the system well-funded, to cooperate with the process and to trust the ASB to run an impartial but fair complaints resolution system,”Jolly said.

The ASB has released the book 'Irk, eek, oh! & really? 40 years: Self-regulation meeting community standards in advertising', which looks back on the industry as part of the event.

Macleay College has announced the first round of speakers for its 2015 AdSpeaks series.

In the hot seat throughout March will be For the People co-founder Andy Wright, The Hallways head of technology Brand Bennett and Leo Burnett Sydney business director Neil Duncan.

AdSpeaks is a series of talks led by industry heavyweights, and takes place tri-annually at the college.