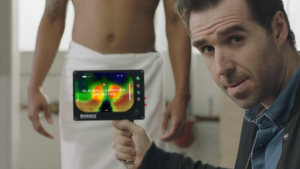 The Ad Standards Community Panel has dismissed complaints about the Bonds Glo-Ball Warming advertisement for underwear with cooling technology.

Complainants were concerned about the language used and that it was discriminatory to men, but the panel found that the ad did not breach the AANA Code of Ethics.

The campaign, created by Leo Burnett, took a "tongue-in-cheek" approach to encourage men to spare a thought for the health and comfort of their balls.

The idea behind the campaign was based on research that suggests men should keep their balls cool and comfy in order to promote optimum testicular health.

Ad Standards received complaints that the ad was against the AANA Code of Ethics: Discrimination or Vilification, Exploitative or Degrading, Sex/sexuality/nudity and Language.

Complaints to the watchdog included:

I feel that the dark guy was ridiculed, if there was a panel or a range of people of all colour (example: a white guy, a chinese guy, french guy) not just ONE dark / coloured guy talking about how his balls would be better if he wore BONDS jocks they were advertising. I feel the coloured guy got singled out. Like he was put up as an example, of a laughing stock.

Instead of using the term testicles the advertising agency chooses to use the term 'Balls" which is not only crass but immature. The term "Balls" is used over frequently in the advert and is a term that should be left in the boys toilet rather than in prime time TV slots

I was disgusted and deeply offended as a male by the manner in which Bonds were promoting this particular ad for mens underwear, it was lewd, offensive, to portray mens genitals as cooling 'ball's' as a cartoon type feature, I felt my maleness was being openly and truly ridiculed and something to be giggled at. It seems males are fair game in this style of GRUBBY advertising and we are all the poorer for it.

It’s inappropriate at this time of day as children may be watching tv at this time is crass and demeaning and objectifies the model standing there.

Bonds refuted the complaints made against the campaign. In a statement to Ad Standards, the underwear brand said the comment about race was "unjustified" and that there was no isolation made or focus on one race throught the TVC.

It also fought back at the claim that the ad "inappropriately depicts male nudity or genitalia" as no nudity is shown in the ad and the image on the screen of the thermal camera was "an obscured, dramatized, computer-generated graphic/animation used to illustrate the very real product benefit occurring inside the underwear, which uses fabric technology to cool the body and wick moisture."

In regards to the complaints surrounding inappropriate language, Bonds likened using the word "balls" as many bra campaigns have used the word "boobs", therefore no being offensive.

The brand made a final note that the TVC had received a 'W' classification from ClearAds which allowed it to broadcast the ad any time except during or adjacent to P and C programs. This means the ad would not be aired during children's programs.

Ad Standards released a full report on why it did not deem the ad to be in breach of any of the Code of Ethics including that the ad was not misleading about a men's health issue as the code does not require the product or service in the ad to occur to all people.

The panel also noted Bonds used a pun to advertise and referencing an environmental issue is not itself an issue under the code and that there were also several races depicted in the ad; therefore it did not vilify one in particular.

Finding that the advertisement did not breach the Code on other grounds, the Panel dismissed the complaints.

Bonds is not strange to controversy or complaints regarding its ads.

The Aussie underwear label has previously come under fire for its Boobs and Shape Your Shop campaigns with complaints about the ads degrading women and being sexist, and an email campaign featuring children that people slammed for being "unduly sexualised".

In all three instances, Ad Standards dismissed the complaints.