The Biggest Loser continues to shed viewers as Married dominates 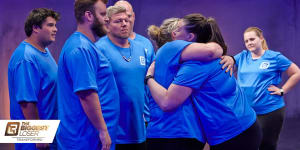 The Biggest Loser’s audience dropped to just 305,000 metro viewers on Sunday evening, down from its launch episode that saw only 450,000 people tune in.

As the weight loss program struggles, Nine's Married at First Sight has achieved its biggest ratings of the series, pulling 1.19 million viewers and beating out Seven News for the most watched program of the night.

Seven’s My Kitchen Rules was the second most watched entertainment program of the night, attracting an audience of 1.02 million.

Married at First Sight and My Kitchen Rules dominated in the key advertising demographics, with Seven’s Sunday Night and Nine’s 60 Minutes also making it into the top five programs.

With Bondi Rescue (326,000 viewers) also failing to pull in audiences to match the success of MKR and Married at First Sight, Ten has dropped behind Seven, Nine and the ABC in daily share of audience. Nine is out in front with 31.2%, followed closely by Seven with 30.1%, the ABC with 19.5% and Ten with 12.9%.

Last week, Married At First Sight helped Nine dominate ratings across its key demos while Seven still won total people (see charts below). Ten was the biggest loser as its new tent pole helped it slip even further behind its commercial TV rivals.

The question remains how much longer Ten will be able to tolerate prime time audiences of around the 300,000 mark before the show is hooked. Last year, Nine's DIY flop Reno Rumble was pulled despite drawing larger audiences.