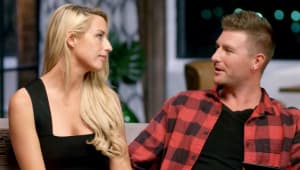 Sharon remains largely unimpressed by a vomiting episode from her new partner Nick on Nine's Married At First Sight.

Nine's Married at First Sight has come within a whisker of beating Seven's My Kitchen Rules but has secured ratings wins in all of the key demos on Sunday night.

Last night, Married At First Sight couples revealed whether they'd like to leave each other or stay with mixed results, but increasingly viewers have been chosing to stick with a show that has gradually grown in audience over the past two weeks while MKR's ratings ebb and flow at levels below last season.

Only 11,000 metropolitan viewers split the two programs, with MKR watched by 1.075 million compared to Married At First Sight's 1.064 million.

The result will please Nine executives, who have always coveted the 16-39s and 25-54 metropolitan demos, but few would have predicted Married At First sight would be this close to Seven's juggernaut, which enjoyed a resurgence last week.