The Bachelor finale pulls 1.1m viewers and the heart strings 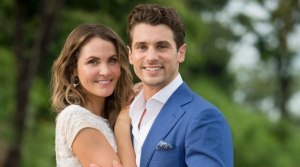 More than one million people tuned into to The Bachelor finale last night to see Matty J mend his broken heart and find love with Laura Byrne.

The Channel Ten show was slightly down on last year's finale audience of 1.3 million metro viewers, with an audience of 1.116 million. The first half of the finale was watched by 980,000 viewers.

In the entertainment category, Seven’s Home and Away came in second with an audience of 697,000 following by Nine’s RBT with 652,000 viewers.

The conclusion of season five of The Bachelor dominated its timeslot in the capital cities and key advertising demographics, including 16-39, 18-49 and 25-54.

Network Ten chief content offcier Beverley McGarvey says: “In its fifth season, The Bachelor Australia again proved it is one of the most talked about programs on television and a program that generates strong results across multiple screens.

“This show has become a pop culture phenomenon, engaging and connecting with people on all screens."

During last night's episode of The Bachelor an emotive same-sex marriage ad stole the show. Watch it below.