The art of buying: What digital video has to learn from TV 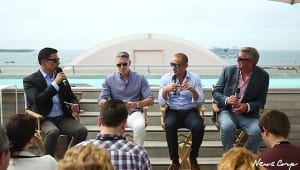 This daily panel show in Cannes is produced by MCN and News Corp. To see yesterday's video, go here.

Digital publishers, TV networks and agencies are pouring vast resources into reaching audiences across all screens and channels but it is creating material levels of friction because everyone is using competing systems and metrics.

Despite the disparity and competing agendas on measurement and trading currencies, they agree they must align - at least according to senior executives at AOL, Carat, ESPN and MCN.

Speaking on a daily panel show in Cannes produced by MCN and News Corp, ESPN’s executive vice president of global sales, Eric Johnson, urged the industry to learn from the legacy of television even as the medium reinvents itself as video across all screens.

“The currency has to change into something that is adopted by everybody,” said Johnson. “Everybody is looking at different ways to measure success. Every single agency group, even clients within agency groups are doing it differently. It is very difficult to transact when you don’t have one common currency. “

That singularity “has been the beauty of television, one common currency that both sides [buyers and sellers] could agree to,” said Johnson. The media industry has to figure out “something that captures the new consumption pattern” in a way that becomes “industry standard-ish,” he added.

MCN’s Mark Frain agreed. From an Australian perspective, he added that the TV industry itself must adopt common trading architecture.

“Without the systems and infrastructure, we can have lots of conversations about moving forward. But it won’t happen fast enough unless we get industry buying at a system level,” said Frain. “Alignment across the industry will be key for us next year.”

Even if industry can achieve a common view of audiences, it must return its attention to quality content, according to Carat US CEO Doug Ray, or risk making the effort in vain.

A lack of “fit for purpose content delivered in the right context and [via] the right platforms is the biggest issue holding back clients right now,” said Ray.

“They understand the value of going cross screen. But the question is, do they have the right content to be able to engage consumers effectively?”

Premium content comes at a price, said Frain, yet the legacy of programmatic buying is the price-driven long tail. He warned against overlooking strategic buying skills in push to harmonise automated trading systems and currencies.

“In the programmatic shift, we are losing the art of TV buying, the strategic point of view.” he said. “Too often the conversation is based on one metric - and that is price.”

If the industry is to leverage its investments in stacks and systems, he said, “we have to move away from that.”