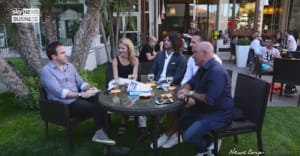 This daily panel show in Cannes is hosted by MCN editor at large, Paul McIntyre, and is produced by MCN and News Corp. To see yesterday's video, go here.

Australian marketers are undermining their brands by succumbing to “short term syndrome”. A fixation with new technologies, new metrics and media channels will compound the problem, according to some of Australia’s top creatives.

Speaking on a daily panel show in Cannes produced by MCN and News Corp, they urged brands not to let the tail wag the dog.

Meanwhile, marketers are under “incredible pressure” to be first with new technology, according to Whybin TBWA Melbourne CEO Kimberlee Wells. “But the danger is that is can lead to laziness on the ideas.”

Short-termism also puts marketers at risk of placing too much faith in questionable media and metrics, added Wells. Traditional media, she said, should not be overlooked.

“[Marketers are] looking for channels, particularly digital, that can give a quick result. But just because it can be measured does not mean we are looking at the right measures.”

BWM Dentsu ECD Rob Belgiovane agreed. He said professor Mark Ritson’s recent deconstruction of social media was a welcome reminder that traditional media such as print should not be cast aside on the back of questionable metrics.

“When you examine the data really closely, traditional media is a far superior opportunity than social media,” said Belgiovane.

But that data is not currently reflected in channel planning. Leo Burnett creative group head, Iggy Rodriguez, said that while print remained part of integrated campaigns, “I can’t remember the last time I received a straight-up print brief from a client”.

Belgiovane admitted it was “a tricky time” for print in Australia.

“There is a lot of pressure on clients to understand the new media landscape,” he said. “But it is crazy for anyone to assume that print’s days are numbered, they are not. If you want to build a brand quickly, using traditional media is expensive – but it is a great way to do it.”

Whybin TBWA’s Wells said the industry had a collective responsibility to ensure a “healthy” print medium.

“For simplicity of idea, there is no better medium. There are so many media around and they are very complicated,” she said. “If they take a lot of explanation, then how on earth are consumers going to understand them?”

The panel was hosted by News Corp to mark the launch of its Press for Change campaign, which challenges Australian creative agencies to devise a print campaign that triggers material behavioural change within the not-for-profit sector. The prize is $2million in media spend.