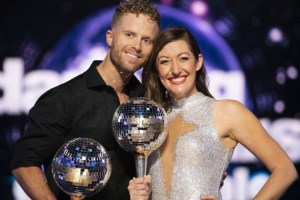 Dancing with the Stars winners

Last night’s finale for Ten’s Dancing with the Stars (DWTS) peaked at 635,000 metro viewers, giving the season its biggest audience of the year.

News dominated the night, as the government revealed further restrictions on Australians yesterday evening to slow the spread of coronavirus.

Nine News had a metro audience of 1.37 million, while Seven News had 1.33 million.

Following news in the top spot for entertainment was Nine’s Married at First Sight, which attracted 1.16 million metro viewers.

The pandemic has disrupted the TV industry, with various shows forced to halt production due to travel restrictions and health concerns.

Ten was forced to end this season of DWTS a week earlier due to travel restrictions.

“This season of Dancing With The Stars has been like no other. The brilliant team have been exceptionally inventive in delivering a safe, world-class season with minimal disruption and lots of creative innovation,” says Beverley McGarvey, Ten’s chief content officer.

“I’d like to extend my thanks to the incredible team at Warner Bros, the BBC and our own team here at 10 for their tireless efforts in bringing this brilliant season to life each and every week. It was not easy, but your determination was phenomenal.”