Ten’s Dancing with the Stars debut ratings down 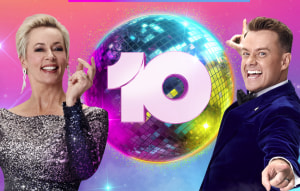 Dancing with the Stars

Ten’s Dancing with the Stars’ launch episode is down from last year in ratings, as Seven’s My Kitchen Rules continues to struggle.

The dance show, back for its second season on Ten, attracted a metro audience of 593,000 viewers last night. Last year the show launched to 615,000 metro viewers.

The audience is a 16% lift in ratings for the timeslot compared to last year for the network, with Ten still positive about the program.

“The first episode of the new season of Dancing With The Stars was great family entertainment and we are very happy with the audience numbers last night and the year on year timeslot growth it achieved,” says Beverley McGarvey, Network 10 cheif content officer.

“Our fantastic celebrities, wonderful hosts and judges did a brilliant job. Craig will be back on the judging panel next week for our first elimination. This series has only just kicked off and the best is absolutely still to come.”

The show has been trailing in ratings since its launch episode, which had an audience of 517,000. There had been concerns of fatigue over the cooking show format as early as 2018, however Seven doubled down on the show, bringing it back with the revamped “rival” format this year.

Topping the ratings once again for commercial TV shows is Nine’s Married at First Sight (MAFS), attracting 1.1 million metro viewers last night. The show has been regularly pulling in more than a million viewers since launching last week.