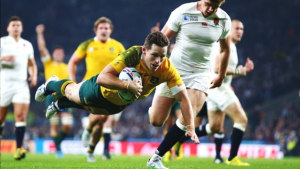 Network Ten and Foxtel have secured the broadcast, streaming and catch-up rights for the upcoming Rugby World Cup in Japan.

Ten has secured a limited free-to-air broadcast deal, with viewers able to watch 10 games from the tournament, including all games featuring Australia's Wallabies side, right through to the final.

Each game can be viewed live on Ten or streamed on the network's broadcast video on demand (BVOD) platform 10Play.

Ten CEO Paul Anderson and head of sport Matt White emphasised the importance of the deal to the network's 'big event' sports strategy, which White discussed with AdNews last week.

The 2019 Rugby World Cup joins other major sporting events on 10 in 2019 including the Supercars Championship, the MotoGP, the Australian Formula 1, The Rugby Championship, the Bledisloe Cup and the Melbourne Cup Carnival.

“In the lead-up to summer, Ten will be the home of event television. We’ll have a full schedule of sport - live and free – with the Rugby World Cup, our Supercars coverage in Bathurst, the Gold Coast, Sandown and Newcastle, the Australian MotoGP, and the four events across the Melbourne Cup Carnival," Anderson said.

"This gives us a fantastic head start to launch our summer programming strategy to millions of Australians, setting us up well for 2020.”

Fox Sports has also secured the streaming and broadcast rights to the tournament, with all matches of the event made available live and ad break-free during play on a dedicated channel and, for the first time, Live in 4K Ultra HD, exclusive for Foxtel sports subscribers.

The pay-TV broadcaster will live stream and broadcast all 48 matches of the tournament, which will include all of the Wallabies’ pool matches, the four quarter-finals, both semi-finals, the bronze final for third place and the final.

Coverage will be broadcast on a dedicated Rugby World Cup channel, which will include match previews, daily highlights, review programs, archive matches from previous tournaments and analysis.

Kayo Sports will also stream Fox Sports’ live coverage to its subscribers and all matches will be available to stream on-demand.

"We will create history with every Rugby World Cup 2019 game available to Foxtel sports subscribers and exclusively live in 4K Ultra HD – this will provide a stunning viewing experience like never before for sports fans," head of Fox Sports, Peter Campbell said.

“The modern Australian sports fan has a rich tapestry of background and heritage. Whether supporting the Wallabies or the All Blacks, England, Italy, South Africa, the USA, Fiji, or Tonga and beyond, our coverage will be for all fans no matter who you support.

Both networks have indicated solid ratings expectations due to the time zone differences between Japan and Australia, which will give viewers more opportunity to see the majority of the games.

“Free-to-air access is important to World Rugby’s desire to make rugby and Rugby World Cup as accessible as possible to rugby fans and new audiences alike. This deal will guarantee unprecedented access to Asia’s first Rugby World Cup and a tournament that promises to be the most competitive to date," World Rugby chairman Sir Bill Beaumont said.

“We are delighted to be welcoming Fox Sports as rights-holding broadcasters for Rugby World Cup 2019. They are long-standing supporters of rugby in Australia, broadcast innovators and with all of the big matches being shown in prime-time slots, will be a destination for Australian sports fans in September, October and November.”