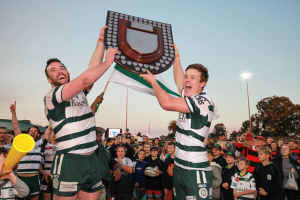 The remarkable story of how two rugby fans bought the media rights to a dying club rugby competition, the Shute Shield, and turned it around against the odds.

After years of neglect, rugby fans Nick Fordham and John Murray couldn’t take it any longer. Sydney’s premier club rugby competition, the Intrust Super Shute Shield, was in the doldrums and about to lose the limited exposure it received on the ABC.

Broadcast on Aunty for more than 50 years, the public broadcaster had lost its appetite for the Shute Shield, beleaguered by budget cuts and a waning interest in live sport.

In truth, the Shute Shield has struggled for attention and commercial backing since the introduction of Super Rugby in the mid-90s, which not only sucked out some of the competition’s leading stars, but also took with it media and commercial interest.

The competition, which first kicked off in 1923, was also being starved of funds by the sport’s administrators, whose primary focus was to invest more into expanding the provincial completion, Super Rugby, than the grassroots – Shute Shield and other tiers of club rugby.

The move away from the ABC at the conclusion of the 2014 season was viewed by some quarters of the rugby fraternity as another nail in club rugby’s coffin, but not by Fordham and Murray.

“When it was coming off the ABC – the ABC was giving up on outdoor sport – we said, ‘Okay, this is a great opportunity to get it off the ABC and get it on commercial television’,” says Murray, a stock broker and president of Easts Rugby Club.

“I think it's fair to say that a lot of the rugby establishment were against that and they were partitioning the prime minister to keep broadcasting the game on the ABC. We kept saying, ‘No, this is a wonderful opportunity to promote and commercialise the sport and to make it a success’.”

Fordham, the CEO of leading sports and entertainment talent management agency The Fordham Company, viewed the ABC’s departure as an opportunity to revive the fortunes of the Shute Shield and club rugby and joined forces with Murray to launch a bid for the media rights to the competition.

“The Shute Shield wasn't in the strongest state at that stage but fundamentally, the core of it was a great thing,” he says.

“We knew that there was a great product there that had just probably been neglected. Considering it was on the ABC and you couldn't have any commercial sponsors or partners or integrations, we just thought if it had that love on a commercial free-to-air network, who knows where it could go.”

The pair ended up securing the rights for 10 years at the eleventh hour in a deal with the Sydney Rugby Union and the NSW Rugby Union which would see them hold the rights until 2026.

The deal Fordham and Murray secured was to acquire the entire rights to the Shute Shield and underwrite the entire cost of production and promotion with the establishment of their production business, Club Rugby TV.

“We've got the rights for a decade and we underwrote the first initial risk period. There's a commitment from Sydney Rugby Union to come up with a certain amount of money to spend to promote the game on Seven,” Fordham explains.

In their first season of rights, the pair chipped in $1 million to get production up and running while they sought out sponsors and a TV network partner.

“We went to the TV networks and had a very positive response from Seven,” Fordham recalls. “Then, right on the eleventh hour, we got a deal done with a naming rights sponsor – Intrust Super.

“Brendan O'Farrell from Intrust Super is really the foundation saviour of Shute Shield because without him it wouldn't happen.”

Securing Intrust Super was the shot in the arm the pair needed and soon after they added Canon.

The 2015 grand final at Concord Oval drew a crowd of 5,000 people, which was perceived by the rugby fraternity as a success.

“So, at that point in 2016, we worked to ensure week in week out the right promotion of the game by leveraging on relationships, whether it's great supporters like Nova, Alan Jones, ESPN, the Daily Telegraph, Ooh!Media with outdoor billboards. All these great people got behind us.” 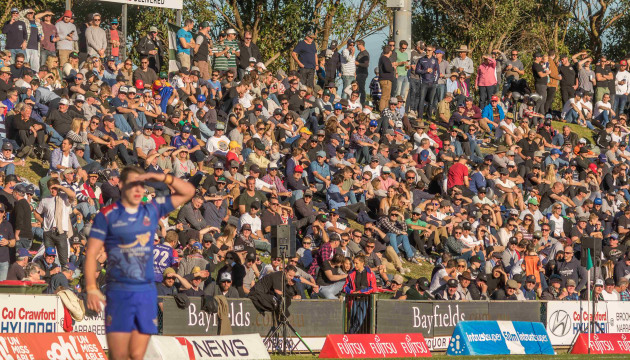 The competition was receiving the sort of promotion that previously it could only dream of, such as huge billboards promoting it across Sydney.

And the sponsorship money has followed. In 2016, the Shute Shield added Fujitsu, Canon, Man Shake and last year Charter Hall with contra deals also struck with Ooh!Media, Nova 96.9 and ESPN.

What’s been even more impressive is how attendances have grown. Last year, games at Manly Oval were drawing 10,000 fans to games, while one of the finals at Rat Park, home of Warringah Rugby Club in Sydney’s north, drew 15,000.

The crowning moment was last year’s grand final at North Sydney Oval. At least 16,000 fans – some estimates have it closer to 20,000 – turned up to watch a the Warringah Rats beat Northern Suburbs 30-25 in one of the greatest deciders in the competition’s history. (You can check out video highlights of the grand final below)

To put that into context, the largest attendance to watch a Super Rugby NSW Waratahs game in the same year was under 19,000.

The final was shown on Seven’s main channel, in New Zealand via the Rugby Channel and the Pacific Islands and in 20 Asian countries via Rugby Pass.

During the regular season, 7TWO and a replay on 7PLUS show two hours of live Intrust Super Shute Shield each round – the only rugby competition on free to air TV in Australia.

Club rugby’s rebirth has coincided with problems in the professional game, such as poor on field performances and attendances at Super Rugby and mixed results at international level.

The flow on effect

Revitalising the Shute Shield is having a flow on effect to the clubs. One of the more famous clubs, Randwick, has doubled its sponsorship revenue since 2015.

“Rugby Australia has to work out a way to gather some of that magic dust from the grassroots game – all that colour, passion, and sheer tribalism – and get it back into the pros,” he wrote.

For Murray and Fordham (pictured right) this is a passion project, but one in which they’ve created a new blueprint for how to reconnect elite 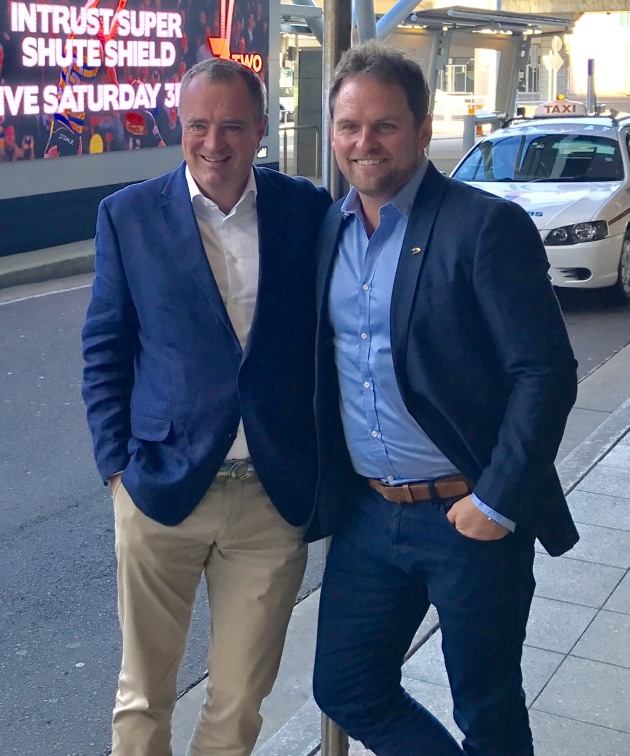 sports back into the community and provide unique value to sponsors beyond signs and spots.

“I think we sort of have almost reinvented the sponsorship
model as well because of the business development side of stuff,” Fordham says.

“Corporate hospitality is key for us, we bring our sponsors and like-minded rugby fans together in a relaxed environment to connect, network and engage while watching the footy.”

As Fordham and Murray control all of the moving parts, sponsors have unique opportunities to integrate beyond the broadcast, such as activations on the ground, digital and social.

“There's that element but then there's the other element as well, as John was highlighting, the business development side.

“We really, really look after our sponsors and ask them what they want. If it's another level of expanding their business, contacts, PR - whatever it is, we'll find a way to deliver it for them.”

In 2018, the there will be replays of each round on Fox Sports. Fordham said this provides sponsors with a new opportunty as the competition reaches a national audience for the first time ever. He added there are sponsorship and live integration openings for brands interested in coming on board this season.

It’s an attractive proposition for sponsors, but what really excites the pair is the atmosphere at games.

“There' real tribalism and community at the grassroots level,” Fordham adds. It's genuine and it's what this is all about – sometimes some of these things get lost at the professional level.

“That's why the grand final really worked last year. It’s about families bringing children, enjoying a beer on the hill, the distant sound of bagpipes and then the red helicopter flying in with the The Honey Badger (Nick Cummins).”

Not bad for a couple of blokes who describe themselves as fans of the game who simply decided to buy its rights.