Telstra CMO: It's a tragedy that creative and media don't talk any more 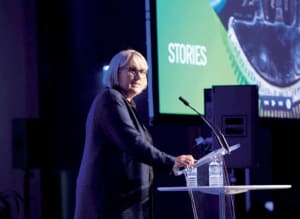 Telstra CMO Joe Pollard has said that the way clients and agencies work together is not the ideal set up for optimum work.

Speaking as part of a broader debate around effective advertising and the television industry at the ReThink TV conference earlier this week Pollard said that while she and her teams have strong relationships and close working practices with agency partners she still would prefer “fewer people in the room”.

Telstra works with The Monkeys and DDB on major creative projects and with OMD on its media. Its rebrand campaign in July was developed by The Monkeys.

ThinkTV chair and Network Ten Melbourne GM Russel Howcroft suggested that one of the great tragedies is that media and creative don't talk any more. The panel was in agreement, but Pollard went further to say that it drives her “insane” to the point where she would rather have fewer agencies and people in the room.

“It is a great tragedy …. I grew up in world where early in my career I spent just as much time with the creative, production and media teams … it's something that I absolutely enforce now that I’m back on client side.

“We don't look at media plans without the creatives. We don't look at creative without the media. If I could have my way, I'd have one group of people … we do it in an artificial way because we bring everyone together so it is one team, but I would prefer fewer people that are 100% on the business, all in the room together.

“If there is any fighting about who owns the client relationship and any of the bullshit that I know goes on, that is not accepted because we are all about having great people in a room to solve our problems.”

A well as frustrations about the way agencies are set up, Pollard also believes that media owners need to be more involved in conversations at the start, beyond a transactional relationship after the creative and media strategy are planned.

“I think the structure of the agency model is hard. You have to force it as a client because its near to impossible to do it if you're sitting on the agency side. And then the added thing from a TV perspective you have to demand the media owner is part of those conversations. We have the best success when the media owner is equally involved. In the creative idea and the brief.”

She used the example of the launch of Telstra SmartHome last month, which was done through a partnership with Channel Nine and integration with The Block and not traditional ad spots.

“I would argue that's been as successful as any ad campaign or digital campaign in terms of awareness,” she added.