Telstra becomes one of the 100 most valuable global brands 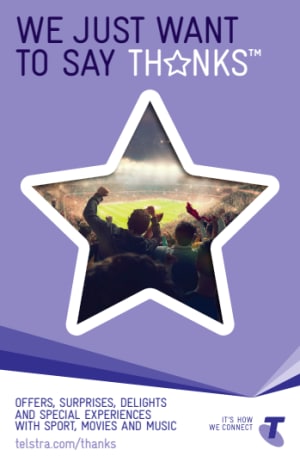 Telstra’s focus on loyalty marketing and improving the perception of its customer service through the Thanks marketing drive is paying off. Its brand value has increased to US$12.7 billion in the last year, which has propelled it into the Millward Brown Top 100 most valuable brands list for the first time. Sitting at 82, it leapfrogged Woolworths and is only the fifth Australian brand to appear on the list.

Commonwealth Bank, Westpac, ANZ bank and Woolworths are the other four. Of those, only Westpac increased its brand value. See below for thier values.

“We’re seeing across the globe that the telco sector is growing, thanks to the growth of cloud computing and multi-screening. Those infrastructure services are becoming more important generally, and for Telstra its growth in brand value came from both its mobile and its network business. From a brand perspective, Telstra has done a lot of work recently addressing its customer service through its Thanks loyalty marketing programme. Its strength is in terms of brand value and brand equity.”

Meanwhile, Apple has replaced Google in the number one slot, having increased its brand value by 67% over the year – from an already high base. Apple is now valued at US$247 billion, while Google is valued at US$173.7 billion – increasing 8% since the last league was published. Apple was in the number two slot last year.

Young described Apple’s performance as a “comeback” and told AdNews that its position over the last year had improved through better products and brand positioning around those.

Microsoft sits in third having increased its value by 28% to US$115.5 billion. The top 10 list – and the Top 100 – are dominated by technology brands which Young said is refelcted the world over because the rise of devices and smartphones means brands that used to be seen as utilities, are now more emotionally connected with people and play a bigger part in everyday life. Technology is the fasted growing category, up 24% in the last year, driven by Facebook which has increased its value 99%, making it the largest rising brand.

The trend also impacts non-technology brands such as Nike, which is adopting more technology focused services and apps, and moving up the league, as well as boosting the importance and perception of pure technology brands like Apple, which provides the necessary infrastructure.

The BrandZ Top 100 most valuable brands list is in its 10th year, and over that time has increased its overall value by 126%. The Top 100 are now valued at $3.3 trillion.

The report also finds that brands valued highly show faster bottom line growth and a fast increase in shareholder value. Ove the last decade brands in the Top 100 have grown three times faster than the MSCI World Index and two thirds more than the S&P500.

The Millward Brown Top 100 most valuable brands are calculated using financial performance of a brand, alongside the views of consumers.