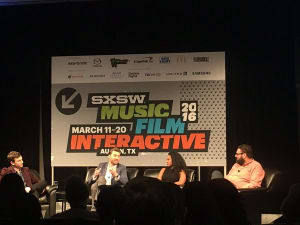 Mashable has inked a deal with NBC Universal’s Bravo channel, which will see the media company produce four web series for the TV giant.

Speaking at South by Southwest (SXSW), Mashable’s founder and CEO, Pete Cashmore, explained that the series will run across all of the publishers distribution channels, with this deal highlighting the business' commitment to its video-arm, Mashable Studios.

“One of the big things for Mashable this year is really focusing on our Mashable Studios, its the fastest growing part of our business,” he says.

Mashable will be utilising the same predictive algorithm it’s perviously used for its written content, Velocity, to test its video content to ensure people are going to watch it. Then, if they watch it, that’s when they’ll serialise the content.

“It’s de-risking the entire process, so we can make sure a series is a hit,” he says. “We look at the way television is made and we say: “Wow, we could really build audiences online prior to taking them all the way up to television.”

Cashmore was speaking on a panel at SXSW, which was lead by Bloomberg’s Lucas Shaw, and Shaw asked why did Mashable want to follow so many other media companies who were also expanding into video?

Cashmore explained that: “People are moving to video because it’s the most impactful way to tell a story. It’s the fastest way to get across a huge amount of information, and with mobile, now that we have fast connections its one of the fastest ways to consume information on your phone.”

He also added that advertisers love video too, because they able to get across their branding all while tapping into the emotion and the likability of video content. He also explained that the rise of branded video content could an antidote to the rise of adblocking, with brands being able to work with influencers or publishers to make content that consumers actually want to watch.

The content that Mashable creates with Bravo could also be pushed back up to TV, with Cashmore highlighting that TV still has immense power that could make the Mashable brand more mainstream.

“There are two things that are right about TV," he says. "It’s still the most lucrative medium, and it will be for quiet sometime. It holds people’s attention for an extended period of time, over a 30 minute session, and it’s also how you take brand mainstream,” he says.

“As that transition happens and we work more with these brands, we can take our brand more mainstream,” he added.