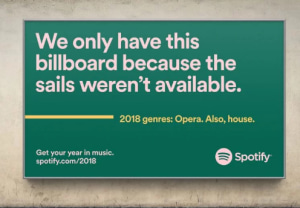 Spotify has poked fun at the Opera House advertising controversy in a new billboard campaign.

Referencing the NSW government's decision to to display a horse racing ad on the landmark, one of Spotify's billboard says: 'We only have this billboard because the sails weren't available'.

The decision garnered massive backlash, with a petition of more than 250,000 signatures and a protest taking place.

The public anger was largely aimed at radio host Alan Jones' role in the episode. Jones was accused of bullying the Opera House CEO Louise Herron on air when pushing to allow Racing NSW to advertise on the building.

Industry executives shared their view on the issue of advertising on a heritage listed site with AdNews at the time and urged the protection of its status.

The billboard from Spotify is part of a wider campaign that uses consumer data and rolls out across the globe. 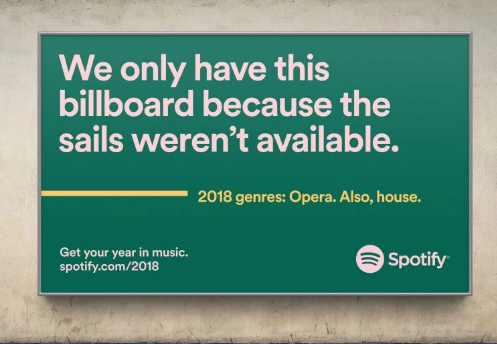 The ads across out of home, social and digital feature users' data, such as number of listens and playlists, to mark key cultural moments.

Other billboards across Australia say: 'The playlist “ScoMo's Mixtape” is 10hrs and 57mins long. Almost the length of an Australian Prime Ministership' and '"Lady Powers" was streamed 2,934 times the day the tampon tax was axed'. 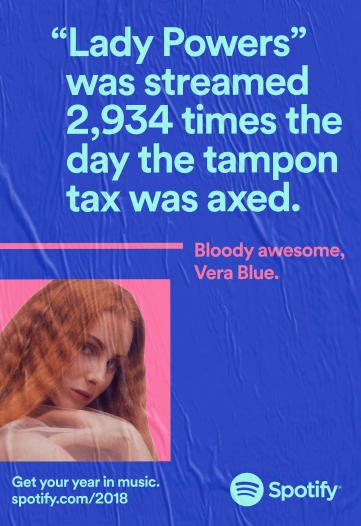 Christopher Doyle & Co, the Aussie independent agency behind the campaign, said it's a way to celebrate the year through music.

“The campaign focused on celebrating local and global artists while providing cultural commentary and unexpected observations on the ways Spotify users interact with the world through music,” it said.