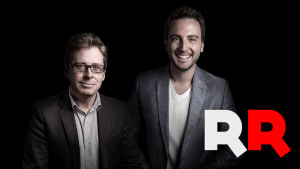 New creative agency Richards Rose is looking to make its mark on the agency landscape by tapping into its roots, with co-founder and CEO Digby Richards saying the agency isn't “into ads, we're into ideas”.

Richards was speaking to AdNews following the launch of the agency, formerly the Sydney arm of AJF Partnership. Richards and ECD Adam Rose bought out their Melbourne partners – Andrew Fabbro, Andrew Foote and Adam Francis – to form the new independent agency that bares their namesake, with the official launch occurring next week.

What will be different, Richards says, will be the growth trajectory for both his agency and for AJF Partnership, which still remains in Melbourne. He explains the decision to split out the agencies followed the Sydney agency winning the Mitsubishi account, which was in conflict with the Melbourne team’s Holden account.

Separating the two means both agencies will be able to grow in a way that makes sense strategically, particularly when it comes to pitching new business.

While the founders have big ambitions for the agency, Richards says holding onto the values that saw it grow while it was AJF Partnership, will be key.

“We’re into business-making ideas, and that’s what’s important. We’re into making things, not just doing ads. We’re into ideas - that’s going to be the approach going forward, how we apply that promise to our clients,” Richards says.

“When it comes to believing in creativity we’re not necessarily after the latest widget, execution or headline – we’re after a long term partnership; the kind of steady hand.”

“It’s just the truth of the agency. It’s the truth in Melbourne as well, but I think particularly for us in Sydney where we don’t have a lot of retail clients and have more strategic clients.”

Richards says the agencies had both been set up independently in terms of resourcing, which makes splitting the two out relatively straight forward.

“Andrew Fabbro, he’s a chartered accountant. He doesn’t know much about ads, but he does know about business,” Richards jokes.

“He’s been invaluable in understanding how to set up these agencies independently. Not for this reason, but you want your offices to be completely self standing in terms of their success and in terms of profit and loss.”

The move also means a shift in the ambition of the agency. It's looking to grow - “steady growth, not radical growth”- but Richards is cautious of the agency becoming too big a beast, where management starts to lose track of staff members.

“Knowing everyone's name is important to me” he says, noting that at the agency's current staffing count, at about 45, it is where keeping a handle on culture becomes incredibly important.

It's even more significant as the agency looks to staff up following the Mitsubishi win. Richards says the agency will be bringing on addition resourcing to ensure the new account doesn't impact any other clients, but will also blend some of that resource too.

“[So existing clients] will get a little bit of access to more resources because which we can bring through growing the business, but nothing else will really change.”