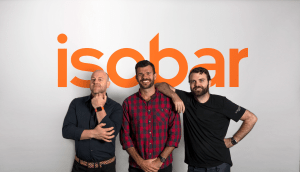 Soap has been merged into Isobar three years after its acquisition by Dentsu Aegis Network.

As a result, the Soap name has been dropped and co-founder Brad Eldridge will become Isobar ECD of the now 300-strong national staff. The position was held by ECD Dave Budge who left last month and is now carrying out freelance work.

Other Soap co-founder, Ashley Ringrose, will lead Soap’s gaming studio, SMG, which will remain a separate brand with the 20+ staff remaining in its Ultimo offices.

While the merger of Soap and Isobar has been speculated since the acquisition in 2015, Isobar CEO Konrad Spilva tells AdNews the time to integrate the two businesses only became right six months ago, when himself, Ringrose and Eldridge initiated a plan to bring the agencies together.

He describes the move as giving Isobar an “arsenal” of creative services that will add to its heritage in digital and data transformation.

“Isobar has been investing in design and engineering for the last two to three years, whereas Soap has operated in the content/campaign space. So merging to two is the best of both worlds and I see it as supercharging both agencies,” Spilva says.

Despite the usual earn out period being three years after an acquisition, Spliva says the move wasn’t mandatory and was led by Eldridge and Ringrose rather than Dentsu.

He reiterates the merger isn’t a cost-cutting measure and aims to keep redundancies “very close to zero”, adding there is little duplication of roles and no conflict clients.

Dentsu also bought creative agency With Collective in 2016, which was ‘linked’ within the Isobar network last year.

When asked if With Collective is also to be merged within Isobar, Spilva says there are “no long-term plans” to stamp out the agency name.

As for other creative acquisitions, Spilva says Isobar is more focused on consolidating its current portfolio, but describes Dentsu as “always hungry” for its next move.