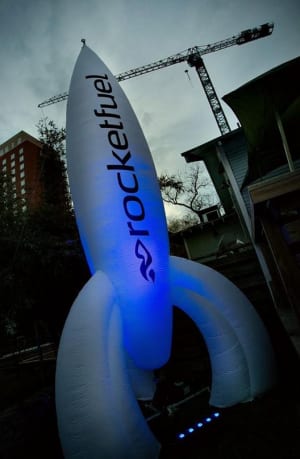 Predictions of more ad tech firms banding together have been circulating for sometime as the booming automation market continues to fire out startup after startup.

Also this morning, ad exchange Rubicon Project has acquired nToggle; a tech company that makes it easier and more cost effective for programmatic buyers to find the inventory they’re looking for among the billions of bid requests they receive each day.

Rumours are also rife that Snapchat is shopping for ad tech companies to help appeal to marketers. Acquisition talks with AdRoll specifically are said to have occurred.

Self-professed “people-based creative optimisation and data activation platform” Sizmek, which itself was acquired by Vector Capital for $US122 million in August last year, has entered into a definitive acquisition agreement with Rocket Fuel Inc in its quest to create one of the largest independent marketing platforms built for agencies and brands.

Under the terms of the agreement, an affiliate of Sizmek, backed by Vector Capital, will commence a tender offer for all of the outstanding shares of Rocket Fuel common stock for $2.60 per share in cash, which represents an enterprise value for NASDAQ-listed Rocket Fuel of approximately $145 million.

Rocket Fuel propelled to a great height when launched by alumni of Yahoo in 2008; in its 2013 IPO it raised about US$116 million; sold shares for US$29 each and in Australia hired eBay's advertising GM Eastwood to kick-start the firm Down Under in 2014.

Many bad headlines later - such as The Street's 'Rocket Fuel Stock Is a Dud' and Forbes' The 'Demise Of The Hot IPO: Rocket Fuel Collapse' – Eastwood then left and it's had at least two major rounds of global lay-offs with the most recent in January as it attempts to save US$20 million in operating expenses.

See: How Rocket Fuel plans to reignite its business

Executive chairman of Sizmek, Dr Mark Grether, says the move is the next logical step in marketing automation and media optimisation and the result is advertising that is “deeply personalised, highly intuitive and AI-enabled for peak performance, redefining the boundaries of creative possibility and media execution”.

“The acquisition of Rocket Fuel brings omnichannel creativity and AI-enabled decisioning together under one roof, providing our clients with a self-service predictive marketing platform that optimises campaigns across the entire media plan,” Grether says.

Rocket Fuel, a predictive marketing platform that uses AI to anticipate consumer response to messaging, combined with Sizmek, will service more than 20,000 advertisers and 3,600 agencies to global audiences in over 70 countries.

In a personal email to clients Grether explains how Sizmek is built on the belief that creating impressions that inspire is vital to building meaningful, long-lasting relationships with customers.

“Our particular combination of technology, intelligence, creative solutions, and award-winning support empowers you to create advertising experiences that cultivate deeper relationships and drive campaign performance around the world,” he says.

“We’re reinforcing our commitment to you by bringing together the best of both worlds—omnichannel creativity coupled with AI-enabled decisioning.  With the integration, you’ll gain access to a leading DSP and DMP and the most robust dynamic creative optimisation and ad serving capabilities all under one roof.  Together, our self-service predictive marketing platform will help you to truly optimise your campaigns across the entire media plan.

“The Rocket Fuel acquisition marks an exciting chapter in our relationship, with a promise to you - with Sizmek, you create impressions that inspire and gain the power to connect with your audiences in ways you never thought possible, which in turn, produces extraordinary results.”

In August 2015 Rocket Fuel was in the limelight regarding a takeover deal from marketing cloud company and rival, Gravity4.

The private San Francisco-founded business, then run in Australia by ex-MediaCom AU chief digital officer turned Gravity4 MD Joshua Rex. It was thought to have made an offer of about US$260 million.

At the time, Gravity4’s founder and CEO Gurbaksh Chahal, who is also the 'disgraced' founder of RadiumOne, wrote a letter to Rocket Fuel's chairman George John and its interim CEO and director Monte Zweben. Rocket Fuel said it did not constitute a credible offer.