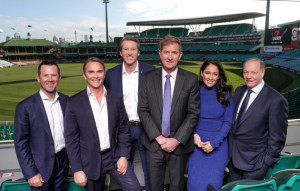 Seven West Media (SWM) CEO Tim Worner has labelled the upcoming summer of cricket as the most "disruptive change in Seven's and Australian broadcasting" history.

Speaking at Seven's cricket launch, Worner spoke to the value of the recent broadcast deal and the opportunities it will provide advertisers.

Seven and Foxtel snatched the media rights for cricket from Nine and Ten in a deal worth at least $1 billion over six years, earlier this year.

The deal sees Seven pick up domestic test matches, including one Ashes series, and the majority of the Big Bash League.

Foxtel has the exclusive rights to some Big Bash League (BBL) games, ODIs and T20s and will simulcast domestic international cricket.

"Cricket creates a prime-time television landscape, no matter what time it is on, from the very first ball of day's play, to the last," Worner said.

Seven's chief revenue officer Kurt Burnette added that the success of the new venture will only be possible if its advertisers are on board and are getting the best out of the opportunities.

The network has only just gone to market with sponsorship options.

"There will be complete integration across all of SWM assets and will be a 'full-blown marketing push' of the game of cricket," he says.

As part of the new deal, Seven has now created set 'mega days' of cricket, which include 13 hours of the game, interrupted only by the nightly news broadcast.

The days will take place during the upcoming summer test series with India and the current season of the Big Bash League (BBL).

Seven revealed that the BBL will also have set days over the summer, that include Thursday, Friday and Sunday and will air 30 minutes earlier than what it did on Ten, starting at 7pm.

Following the event, Burnette told AdNews the new programming structure would create a "hybrid" fan, one that Seven must provide direct access to part of its offering to advertisers.

"There are so many ways to tell the story and that's what we'll continue to do to help bring a new audience to it, and new advertisers will be part of it," he says.

"If you're a brand that has never thought around sport, the way we put the cricket together means that if you are targeting a female 35-54 or a shopper or a young family, cricket might not have been through December/January the first port of call. Well, now it is."

Burnette says the traditional advertising methods will remain the same, such as what Seven is calling "the most valuable 30 seconds of summer" - the ads played between the change of overs.

However, the network has plans to go beyond the "obvious" elements of integration for brands, generating interest around off-broadcast opportunities as well.

"We've considered all the audience flows and migration that will happen onto various assets and we're very comfortable with where our numbers are," he says.

"It'll be about how we integrate through the stories, such as the discussions that are happening around homes watching it, and how we tell the stories of community that are attached to the sport."

The end of the remote

Seven's new head of sport, Dave Barham, told AdNews that this will be the "end of the remote" for not just test cricket fans, but anyone who will engage with the sport.

He says the 'mega days' will provide audiences with more opportunity to consume the sport than ever before, ditching the "disjointed" broadcast pattern created by Nine and Ten.

Now that both BBL and Test cricket are no longer split across Nine and Ten, Seven can offer fans a complete, single channel, experience.

"You've now got this one stop shop for 13 days in summer where you can be a couch potato. You're in heaven. You're just going to sit there all day, just letting it all roll through," he says.

"I don't blame Nine at all. Why would Nine promote Ten's Big Bash coverage? Of course, they wouldn't but this is different."
Barham says the singular network setup will allow for a more succinct broadcast, with each game feeding into one another, with new segments including clips from BBL games being played during Test match lunch and tea breaks.

He says this change in the broadcast will only building on Seven's offering to partners, stating that the network will have a continuous "set of eyeballs glued" to the TV.

If an average Test match generates 700,000 to 800,000 viewers coming into a Seven's news broadcast which, based on OzTam average ratings, averages a million viewers, Barham says this will maintain viewership through to Big Bash games.

"It's an outstanding opportunity for advertisers to jump in and capture already retained attention. That's a massive day where you're going to have the whole audience."

Since joining earlier this year, Barham's focus has been building the new programming layout "from scratch", with initial focus centred solely on the new, diverse, commentary team.

Moving forward, he says it's all about technical development at this point, finding a production team, creating graphics and opening titles and logistics.

"We are tracking well but, put it this way, no one is having any days off between now and opening over."