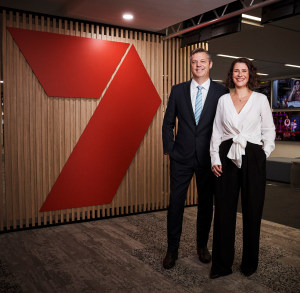 Valente, who had most recently been working as a general manager with Big Red Group, previously worked with Warburton during his time as the CEO of the out of home business.

She was part of the executive team to exit the business following the takeover from French rival JCDecaux.

“Charlotte will bring a strong viewer and client focus to this newly created, senior role in the group, with a focus on launching Seven’s new marketing initiatives, as well as enhancing the look and feel of the brand," Warburton says.

“I worked with Charlotte at APN Outdoor, where she was instrumental in implementing a successful change strategy to help move the company from an asset-led to an audience-first business, a similar role she will perform at Seven.

Valente has worked in strategic marketing roles with range of leading media and marketing organisations including APN Outdoor, Big Red Group and Adshel in Australia and the BBC and The Guardian Media Group internationally.

The appointment of Valente will be followed by two others – chief digital officer and chief content officer – to be part of the new senior management team.

The chief content officer role is a newly created role by Warburton, while the digital position still remains vacant following the departure of Clive Dickens in April this year.

“I am delighted to work with James again and be a part of Seven’s transformation  towards a more audience- centric group, with a strong focus on delivering engaging broadcast and digital content," Valente says,

“Integrating Seven’s multiple platforms to provide an accessible and captivating media offering will be my main priority”, she added.

Warburton added that further news about the structure of his new executive team would be revealed at its Upfronts event on October 23.

Last week it was revealed that Seven had shed more than 100 staff in a major restructure launched by Warburton. Sources say the number of staff to go could be as high as 150 or more.

When approached by AdNews, Seven declined to comment on the exact number of roles impacted by the changes. Three, so far unnamed, senior executives will also leave in what the new CEO has described as a series of "tough decisions".