Ritson: Too many brands suckling at the corporate teat will kill everything 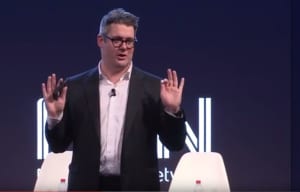 In the final of the series of three lectures for the AANA in partnership with MCN, “Brand Management: Dropping The Stupid Stuff That Holds Back Australian Brands,” Ritson lays into sales promotions, poor positioning and uninspiring category branding. Watch it below.

Ritson's aim is to encourage Australian marketers to build stronger brands – he does so by challenging – forcefully – the accepted norms and lazy tactics currently in common use.

He believes marketing needs to go back to the fundamentals such as brand management.

“Sales promotions are a good thing every now and then, but they are the heroin of marketing. The first time you try heroin, I imagine it's fantastic, but the second, third, fourth and fifth, when you get addicted, your life falls apart,' he says.

He also discusses the poor state of brand positioning in Australia and points out the differences between marketing philosophies of great P&G marketer Jim Stengel and professor Byron Sharp who sit at different ends of the marketing spectrum.

“The world of positioning is in massive flux at the moment. You've all seen generic shit category advertising,” he says, using watch ads and Australian fashion retailers as examples.

Putting up photos of four of Australia's largest fashion retailers without their logos, he demonstrates how indistinguishable they are.

“Australia is a codeless fucking country. You don't know [which is which] and neither do I. They all look the same.”

In true Ritson style his solution is a drastic one: “Kill as many brands as you can”.

“Too many brands suckling at the corporate teat will kill everything ... that's the story of Australian branding. Learn to kill. Moronic brand consultants create brands for companies. I come along with a big fucking kitchen knife and I kill them because then everybody makes more money at the end. Killing is good – not people, brands. Kill as many as you can and focus your organisation. Everyone is doing it except Australian companies.”