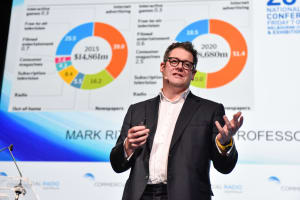 Radio needs an image makeover and should position itself as “the great multiplier” that works with other channels rather than bickering against them, professor Mark Ritson has warned.

Ritson said the radio industry needs to ditch the 'traditional media' tag, challenge digital media 'bullshit' and promote its strength as the best 'home for brands' to change marketers perceptions the medium is dying.

Speaking at the Commercial Radio Australia Conference in Melbourne today (7 October), Ritson said adding a radio element to a TV campaign returns an incremental 21% uplift in effectiveness and adding radio to an online or digital campaign returns a 23% uplift.

“What we have to stop saying is radio is better than Facebook, or TV is better than radio. You’re a small player with a small share, you don’t win by fighting with the big boys, you win by integrating.”

He also emphasised radio’s natural strength as a home for brands – something he believes social media lacks.

One of Ritson’s mantras is the need to stop talking about the traditional and digital divide, calling it “meaningless”. He urged the radio industry to push back against being dubbed “traditional” and against the digital hyperbole and challenge the numbers being presented by the likes of Facebook and Google.

It all boils down to radio’s need to express itself better and change perceptions of the medium and its ability to reach and influence audiences.

“It’s a vibrant successful medium but it’s not being sold as well as it could be against this force of bullshit that is digital media. No one in the client word knows that - they all think you're dying,” he claimed.

“The traditional media are described as being in a death spiral and it becomes a self-fulfilling prophecy. Clients hear it and believe it. [Radio] is a great medium for brands, I’m just not sure how many brand managers think that or will keep thinking it in this digital world. Radio is misrepresented."

Ritson also touched on the recent scandal surrounding Facebook’s misreporting of its own numbers, which saw it inflate its own video metrics by up to 80% for two years.

“What you [radio] do wrong is you report metrics properly,” he joked, adding that radio should emphasise the simplicity and transparency of its metrics. It’s going to get worse when the tsunami of digital video crashes properly… it’s already started to crash but there’s more bullshit to come and radio will find itself struggling in bullshit numbers,” he says.

One mistake radio should avoid is selling itself as a kind of social network, he added.

“Don’t sell it like its social media – it’s too good for that. It’s a strategic mistake to say ‘we’re also social’. Don’t present radio like it’s social – play radio as its own entity. Remember how good for brands radio is. It’s a natural medium for brands to work their magic and remember, you’re not fucked.”

Ritson, who is often wrongly accused of being anti-digital, is a proponent of marketers and agencies making fully-informed decisions about the marketing channels they invest in, and having full clarity about exactly what they are measuring.

Marketers have forgotten the fundamental basics of marking as a discipline, according to Ritson, which means starting with the objective, coming up with an idea and allocating funds to the best media channel to deliver on – rather than rushing headfirst into digital channels.