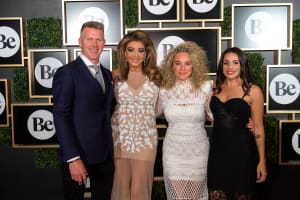 At last night’s lavish launch of Yahoo7’s new lifestyle destination, Be, it was unveiled Real Housewife of Melbourne star Gina Liano was revealed as the celebrity personality set to front the fashion vertical.

The barrister turned reality star addressed more than 300 guests at David Jones’ Ballroom in Sydney, joining the other contributing Be personalities, including radio personality Maz Compton and My Kitchen Rules ex-contestants Ash Pollard and Scotty Gooding.

Yahoo7’s new platform was announced in June as a “socially-driven destination”. The site will leverage the social followings of its celebrities to create content on its core categories of entertainment, fitness, food, travel and fashion. The celebrities will work together with its editorial team to curate more than 150 articles per week, however Yahoo7 declined to comment on the size of the new team in place.

AdNews understands seven months of content has already filmed ready to be rolled out.

Digital director Caroline Casey tells AdNews the launch of Be follows research showing there is a big demand for lifestyle and entertainment content in the 18-54 age female demographic - previously untapped by Yahoo7.

She says the platform will utilise social platforms and focus on video content to appeal to the demographic. The large social followings of the celebrities, such as Liano with more than 40,000 Twitter follows, put Yahoo7 in a unique position to natively market the platform around its launch. Casey tells AdNews a TV commercial will be released in the coming weeks.

Liano with her flair for fashion will star in a series called ‘Judge Gina’ where she will give her opinion on topics like when it is appropriate to wear active wear.

"Social plays an extremely important role in driving audience traffic. By combining Australia’s most loved personalities with Yahoo7’s track record in creating premium content and infusing our owned utilities like Polyvore, we are able to deliver the most premium lifestyle and entertainment experience to a whole new social audience,” Harrison says.

Be will leverage Yahoo7’s tie-up with Polyvore, offering an ecommerce element to the site. This means readers will be able to shop looks recommended by Liano, which could hold opportunities for commercial partners moving forward.

“Be offers advertising partners a new medium to target an engaged demographic,” Casey says. “We know how important social is and we see the authentic voices of our celebrities making our content stand out against our competitors.”

Previously, Casey told AdNews that apps are the key to infiltrating mobile. In the next few months, Casey says she will be pushing for the launch of an app for Be.