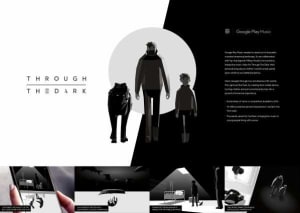 Google Through the Dark. R/GA Sydney

R/GA Sydney has picked up two Gold Lions, a Silver and  Bronze in Digital Craft for its  'Through The Dark' work for Google. It also scored a Silver in Film.

Clemenger BBDO Melbourne picked up a Bronze in Film  for TAC’s 'Every Speed Has a Consequence' made by Finch. The campaign picked up two further Bronze Lions in Film Craft.

No Australian work was awarded in the Creative Effectiveness category. Just 21 Lions were handed out in the category. Headspace: Reword Leo Burnett Melbourne and ANZ Bank GAYNZ TBWA\Melbourne were both shortlisted.