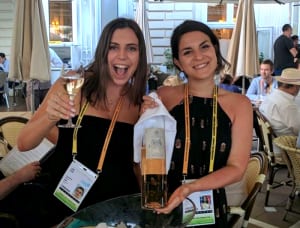 UM Sydney's Grace Espinoza and Charlotte Berry have come runners-up in the Cannes Young Lions media category.
The pair, which took out the Australian competition, had to turn around a brief for Amnesty International in 24 hours help the charity refresh its 'Write of Rights' platform to reach a millennial audience.

Write for Rights asks people to submit letters to show support for people who are suffering human rights abuses, such as being unfairly imprisoned for speaking out against injustice. To date, the campaign has deliver 4.66 million letters, emails and other actions.

Espinoza and Berry's idea involved compelling university graduates to commit to Write for Rights around graduation.

Universities are a hotbed for opinions and activism, and the idea anchors this energy around a poignant and symbolic moment during a student's life.

“What they did is create a visual device that acted as a sign of solidarity and a public deceleration that their going to write a letter,” explains UM Sydney strategy director Chris Colter, a past winner of competition with Mindshare's innovation director Jack Smyth (then Initiative).

“This device took the form of an Amnesty International yellow clip that would go on their graduation tassel.

“At the graduation ceremony they would invite people who have been wrongly imprisoned and experience this side of the world to be a guest speaker to inspire others.”

More than 30 countries took part in the category with the winning entry taken out by IPG Mediabrands UK associate strategy directors Robert Bellamy and William Parish.

Bellamy is a former strategist at UM Sydney and the agency turned out four of the five media finalists at this year's Australian Young Lions.

“Both of the girls have been in the industry for less than two years, it's an amazing achievement to beat 29 other countries,” Colter says.

UM CEO Ross Raeburn adds: “It’s an amazing result and continues a long run of young UM Australia talent taking out top global honours at Cannes. Identifying, developing and supporting this next wave of agency leaders is a priority at UM.”

AdNews was unable to contact Espinoza and Berry but has been reassured they are enjoying a rose or two in celebration.