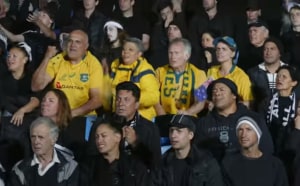 Qantas has released an in-flight safety video featuring everyday Australians sharing the Aussie spirit with locals in some of the airline’s destinations around the world.

The video pulls on Aussie heart strings while delivering safety messages in a clever way. It was co-produced by Qantas and several agencies, including Brand+Story, ape, The Butchery and Noise.

Once a somewhat sterile and 'going through the motions' experience, airline safety videos have become increasingly clever, witty and are important in purveying an airline's sense of purpose and spirit in a highly competitive marketplace.

It has turned a mundane consumer experience into a memorable one, becoming an important battlefront in how airlines market themselves directly to consumers.

There's a personal stylist playing rooftop cricket in Tokyo, an education agency worker singing in the Andes, an Aussie actor riding the front seat in a New York cab, a Tim Tam slam in Johannesburg and a bunch of Wallabies fans celebrating a try in Eden Park. The pilot in the film is Michael Armessen, a second officer on the Qantas A380.

It doesn't get much more Aussie than this (aside from the try in Eden Park) - and that's the point.

“The primary purpose of these videos is to communicate an important safety message, and we know from our previous efforts that beautiful locations with a touch of humour is a great way to get people’s attention each time they fly,” Qantas International CEO Alison Webster says.

“This video lets us show off some of the amazing places you can travel on our network, and acts as a quick induction on Australian culture for visitors overseas about to fly here on a Qantas aircraft.

“We use real people, rather than actors, in our safety videos because it creates a sense of authenticity that’s very Australian in itself.”

Here are the past two safety videos from Qantas.

Air New Zealand takes a slightly different approach with a heavier focus on humour and celebrity.