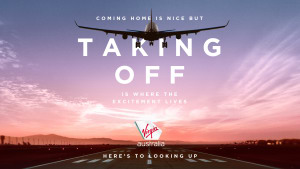 Here's to looking up

Virgin Australia is overhauling its brand marketing with the introduction of a new positioning, a new tagline, new creative work and a host of new messaging.

It’s the first major work from Inese Kingsmill, who joined Virgin as CMO in January, and the first work to come from DDB which was won the creative business for the airline back in June.

‘Here’s to looking Up’ and the concept of ‘Uptimism’ (a play on optimism) are designed to capture the spirit and mindset of the business, and in turn connect with people who share its values.

Ben Welsh, DDB Chief Creative Officer, says as an airline, Virgin “connects people with opportunity” and it wants to convey its “upbeat excitement” and that it’s the taking off, not the coming home, that is exciting.

Kingsmill tells AdNews Virgin has been quiet for a while, because it was gearing up for a major rethink about how it positions itself in the market.

Over the last 12 months Virgin has done a lot of work internally on refining its purpose and values and being clear on why it exists. After establishing that it wants to be ‘the world’s most rewarding travel experience’, it then had to focus on the external brand.

“When you've got a purpose that is your true north and your values around how you deliver that, the time is right to ask what it means for the brand and what is the brand platform that we need to sustain us through the next evolution of business growth,” Kingsmill explains.

Taking off is where the excitement is

It’s no surprise that what Virgin is doing is the complete antithesis of what rival Qantas is doing.

In the last two years Qantas has reestablished itself as the champion of Australians coming home with its work using the ‘Feels Like Home’ concept. One of the Virgin’s creative executions uses the copy: ‘Coming home is  nice but taking off is where the excitement lives.’

“Coming home is nice, and there is an airline that owns that territory. The Virgin brand globally has a sense of energy and positivity about it, this is a great brand fit and its genuine” she says.

“One of the things that was important to us, is that ‘We’re the Uptimists’ is the ‘collective we’. It's our people and the guests who fly with us, who take a positive and optimistic view and share the belief that if we’re positive, then better things happen.”

She tells AdNews that the brand platform is about an attitude and a spirit, rather than targeting any specific segment.

The pitch was only decided three months ago, which means it's a fast turnaround fo a major positioning campaign. It was a live brief throughout the pitch and the idea that Virgin is launching is the concept DDB presented in the pitch, “so no work was wasted” says Kingsmill.

“It was important that we were going to market for more than an ad campaign. We wanted a powerful, sustainable brand idea that conveyed a point of view and belief that Virgin Australia shares with the people that like to fly for us,” she tells AdNews.

The ad will air for the first time during the AFL Grand Final on Saturday 30 September and the brand is also doing some activations at the stadium during the game between the Adelaide Crows and the Richmond Tigers.

In what it’s calling the ‘Virgin Australia Fan Report’ it is using a number of sentiment tracking tools across social media and in the stadium to see what impact optimism can have on the outcome of the game. It’s tracking things like noise levels, fan heart rate and colours in the stadium.

Virgin has been the official airline partner of the AFL for seven years and is using one of the biggest advertising opportunities in the Australian calendar to launch the work in the AFL Grand Final, because Kingsmill says she felt they needed a “big national stage” to launch on. Kingsmill wouldn't reveal the spend, but there is a significant investment in television and digital properties and one-to-one platforms.

The TV ad was filmed around Australia and features a number of people it believes share the ‘optimism’ of the brand, including 30-year-old rock-climber Andrea Hah from Ninja Warrior, 13-year-old up-and-coming AFL star Jack Peris and GWS Giants players Adam Kennedy.

It has also worked with CHE Proximity of a suit of personalized communications for Velocity Frequent Flyer members.

“I’m a big believer in both, this is what’s most easily visible in a mass market sense but there is a lot more below the tip of the iceberg. You can't do either or. We wanted to help people remember what it is that VIrgin Australia stands for.”