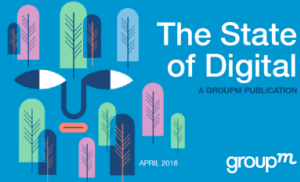 Australian consumers with spend slightly more time on media each day, up to 7.9 hours from 7.86 hours in 2017. Australians consume much less media per day than the global average, which is 9.73 hours.

The only medium that to experience growth is online, which is forecast to rise to 3.05 hours per day this year, compared to 2.9 hours in 2017.

Time spent on TV is tipped to fall to 2.5 hours per day this year, down from 2.53 hours last year.

Radio is predicted to drop from 2.04 hours to exactly two hours per day, while time spent on print will fall from 0.39 hours to 0.35 hours.

Globally, online’s share is 38% to TV’s 37% – the first time online has trumped television.

While time spent with online media is tipped to grow, so too is the volume of online media that is transacted programmatically.

The proportion of online display investment in video is also tipped for a shar rise from 30% last year to 35% this year.

Smart speaker penetration is poised to double from 5% of households in 2017 to 10% this year. 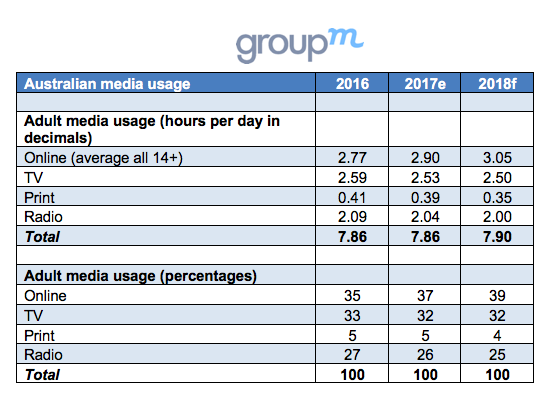 Digital video competition: Legacy TV players are believed to hold three-fourths of all video hours but less than a third (29%) online video hours.

The duopoly: Google and Facebook continue to be the key growth drivers. Google search is critical to clients, and YouTube is increasingly important for scaled, “premium” video. Concerns over the quality of programmatic inventory in the Google Display Network persist, but remedies are being pursued.

Facebook’s success is partly due to the delivery of younger audiences via Instagram. The surge in large-advertiser investment in 2016-2017 also helped double Facebook’s share of digital investment ex-China.