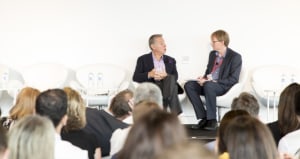 Irwin Gotlieb in discussion with Videonet editor in chief John Moulding. The GroupM chair spoke to AdNews on the sidelines of the Future of TV conference.

Advising the CPM of cheap digital inventory is in way comparable to the CPM of a TV spot or other forms of premium inventory is “malpractice” and akin to comparing “rotten apples to oranges”, GroupM’s global chairman Irwin Gotlieb has warned.

Speaking to AdNews on the sidelines of the recent Future TV Forum in Sydney, Gotlieb had strong words for marketers and agency partners that tried to find equivalence between vastly different quality media on a CPM basis when the viewability standards of digital inventory and television were vastly different.

“It's malpractice. It is comparing apples to oranges. It is not what we should be doing. We argue this issue with our clients constantly,” he says.

GroupM has tried to overcome the problem by raising the viewability threshold on all of its digital inventory to be 100% viewable and at least half of the length of a video ad length before it counts as an impression. This is well above an industry standard that suggests only seeing half of an ad for a couple of seconds is enough to leave viewer with an impression.

“We attempted to create a level of equivalence between digital video and television video. Is it 100% equivalent? No, we'll never get there, but we've at least made an attempt to do it,” Gotlieb explains.

“Everybody who is relying on the IAB standard and saying a two-second exposure with 50% of pixels visible is equivalent to a 100% viewable TV ad - that's just silly. That's not even a serious conversation. Let's call it what it is, it's malpractice.”

'Not all inventory created equal'

Gotlieb says a major problem the industry needs to tackle is that it uses CPMs as a currency to compare impressions across different media channels and this is driving a bias towards cheaper and lower quality digital impressions that deliver more volume for the same cost.

He believes Australia is already over-indexed on digital media with about 52% of media budgets allocated to digital compared to under 30% in many other markets. On the flip side, marketers underinvest in TV, despite TV consuming well above 80% of total video viewing.

“Don't forget, we don't allocate dollars, we allocate what it costs us to achieve a desired volume of impressions. So, if you start with 50% of your dollars going to digital and you're a distributor across video and display, you could be seeing 85% or 90% of your impressions coming in that sector,” Gotlieb says.

The main benefactors of this skew to digital has been Facebook and Google that promise great reach at lower cost. Ads on their user-generated content platforms (YouTube, Facebook and Instagram) are delivered to individuals based on their interests rather than mass audiences watching a specific TV show or listening to a radio program.

This targeted approach promises to reduce wastage and costs less, but may also miss reaching consumers that may not be in market or aware of your product. There is also the risk that ads may be placed alongside undesirable content and viewers are typically less likely to pay attention to ads on smaller screens or in a non-linear environment where ads can be easily skipped.

That said, Gotlieb believes the major concern he has with digital advertising isn’t the inventory found on Facebook or YouTube, but rather the “tonnes of players that represent the long tail”.

Typically, these impressions are bought on ad exchanges like Google’s Display Network, that helps websites of varying levels of quality commercialise. Website inventory can be auctioned at bargain basement prices.

Media agencies will usually impose white lists or black lists to weed out the chaff, adding some of this inventory to a broader pool can help lower the overall CPM of a campaign.

“I think it reflects the enormous pressure that agencies have been under to deliver greater and greater efficiency, lower and lower costs, greater savings against client media budgets, and this is the inevitable outcome of that,” Gotlieb says. “You trade a rotten apple for an orange.”

Yesterday, Gotlieb told AdNews that media cost-cutting is eroding client's market share and this is being driven by a disconnect between procurement, marketing and sales.