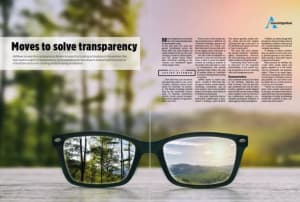 If these are added, the estimated cost is 54-62 cents for every dollar spent on programmatic transactions, which means that only 38-46 cents of every dollar is purchased media that goes to a publisher. 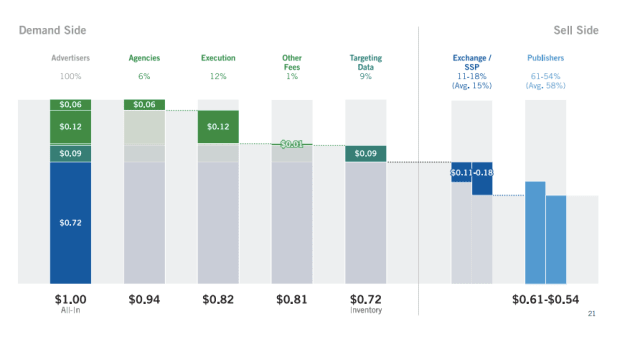 The study, Programmatic: Seeing Through the Financial Fog, doesn't account for the potential effects of ad fraud, non-human traffic, poor viewability or brand safety. It also doesn't consider the effects of arbitrage, where a holding may buy inventory in bulk and their agencies on sell it to clients and pocket the margin.

Ironically, the sample size of the study was hindered by non-disclosure clauses and agency push back, reducing an initial sample of 58 advertisers to only seven who participated in full. AdNews has published a full list of the reasons why so many advertisers dropped off below.

The major findings of a tech tax are not dissimilar from previous studies carried out by the World Federation of Advertisers (WFA) once agency fees are included. The WFA study found 60 cents in the dollar covers programmatic transactions and fees.

AdNews is hosting an event that tackles transparency in the programmatic supply chain, looking for ways the ecosystem can be made more transparent. There are a few remaining tickets to AdNews Live! Tackling Transparency on June 27.

In Australia, a the AANA's Media Challenge event this year provided an explanation of the programmatic supply chain and the tech tax by Ebiquity's chief strategy officer Nick Manning. You can see his presentation in full below.

When demand side costs are isolated, the study found the ratio of working to non-working spend is 72/28% percent

Across the 445 analysed completed campaigns the ratios varied from being as high as 85/15 (working/non-working) to as low as 30/70.

When CPMs were explored in greater depth at campaign level, this added 45% to advertiser’s cost for display and 35% to cost for video inventory.

The report warns advertisers that a conflict of interest can often exist when a media agency is acting as a principal (though its holding group) and agent.

At the heart of the problem is the widespread use of non-disclosed programmatic buying agreements and a lack of client knowledge about how the programmatic ecosystem works. In some cases clients weren’t even aware of the buying arrangement they had.

Bill Duggan, the group executive vice president of the ANA, warns that advertisers need to give careful consideration about buying programmatic media on a non-disclosed basis.

“In a non-disclosed model, one likely won't be allowed access to this information, instead agreeing to accept an aggregated report for all media and services provided,” Duggan says.

“Given the murkiness and complexity of programmatic buying, there are hidden fees and costs in the programmatic "financial fog." And that costs advertisers money! In an era where advertisers are obsessed with ROI and accountability, they would be wise to pay close attention here. Otherwise, buyer beware.”

Earlier this year, AANA CEO Sunita Gloster asked the ANA's CEO Bob Liodice why all of this matters. Check out the intereview in full below, as well as highlights from Marc Pritchard's now-famous presentation in Orlando.

Remember to check out AdNews Live Tackling Transparency to hear what NAB CMO Andrew Knott and a range of the industry's leading thinkers have to say.

Here are the ANA’s recommendations

Programmatic media may be complicated, but it can be demystified. Transactional transparency can be a reality when advertisers take active control of the raw transactional data at the heart of every programmatic purchase (winning bid log data and metadata). If you choose a disclosed approach, insist on access to, portability of, and control over your transaction data as one feasible method to verify compliance and accountability.

Disclosure and transparency should be approached from a legal, process and technical perspective. The challenge of programmatic transparency is not just technical — thousands of sites, millions of impressions, 24/7 buying — but also a legal and procedural challenge, where clarity in roles and responsibilities of all parties at the outset is vital.

Ensure incentives and objectives are aligned. The growth of programmatic media has paralleled the growth of the agency trading desk (ATD) and independent trading desk (ITD). Like all parts of the digital supply chain, ATDs and ITDs can play a valuable role, but it’s important that advertisers understand the relationship between the agency of record and its affiliates and partners/vendors to determine whether there might be a conflict of interest.

Use of an agency trading desk almost always led to non-participation and disclosure challenges. There was a high correlation between advertisers which used an agency trading desk and those which could not participate in the study due to non-cooperation or non-access to transaction level data. If you choose to utilise a trading desk, be sure you understand what impact this may or may not have on your ability to assess, audit, and analyse your transaction data as a means of financial verification and control.

Fee models varied far and wide and were not always understood. Across study participants (and early exploration of partial participants), it’s clear there is no “one-size-fits-all” model for programmatic media and the fees associated with its execution. We saw numerous models in practice deploying all combinations and permutations of agency, trading desk, DSPs, managed service, self-service and various ad tech. The important point is that you should explore all options when developing your programmatic approach, craft the model that is best for you, and ensure there is a verification and audit method in place from the start.

Advertisers with clear programmatic KPIs are in better control investments. Given the complexities and costs of the programmatic supply chain, the precise role and KPIs to be achieved need to be clear to all involved. In a variety of instances, KPIs were hard to identify or prioritise, making proper assessment difficult. KPIs will always differ based on campaign objective and location in the marketing funnel, so alignment on this point is crucial. Those advertisers that set and then monitor against appropriately-set KPIs are in far better position to take advantage of the benefits of programmatic media and to ensure campaigns leveraging it are appropriate for this form of media buying.

Disclosure and transparency will put you in greater control, but performance still drives the bottom line. While proper disclosure puts the advertiser in a superior position with respect to governance and supply chain management, it does not guarantee that your media partners will deliver adequate results, or better results than in a non-disclosed arrangement.

“Disclosed” vs. “non-disclosed” media buying. This was the fundamental issue that drove (or hindered) much of the study process. Advertisers which did not explicitly plan for and address programmatic disclosure issues were much more likely to find themselves faced with a myriad of challenges to transparency. In a few instances, advertisers participated as an opportunity to re-address this issue.

Unclear escalation path. The request to access and analyze transaction data on behalf of advertisers was new to many of the parties involved, and the request was often passed around with no concrete response or with delays.

Inconsistent, non-standardized practices. Unlike ad server logs, with which the industry has a long history and greater clarity on access rights and privileges, there are currently few industry standards around ownership, provisioning, and delivery of log-level programmatic bid data to advertisers, which created delays and/or offered excuses for not proceeding.

Variability in technical ability across DSPs and trading desks. While many DSPs contacted were highly co-operative when proper requests were made for data delivery and transfer, in a few cases, DSPs claimed they did not have the technical ability to generate logs and/or transfer the client’s data in a timely manner.

Omission/discrepancies on required campaign details and third-party fees. To analyse each campaign, parameters were required, including budget, KPIs, flight dates, and invoiced spend. In addition, fees incurred that were not part of DSP log data were required as well. In multiple instances, the data received was either incomplete or differed based on who communicated the inputs.

Complexity mapping DSP data to ad-server data. Notwithstanding the fact that the industry leverages ad-server logs as the de facto “truth” for campaign activity and spend, there is limited ability or consistent processes for mapping DSP insertion order to ad-server data. Such a process — which we recommend needs more attention — would clarify budgets being spent on programmatic media and each DSP, and how those relate to the budget and actions being communicated by the ad server.