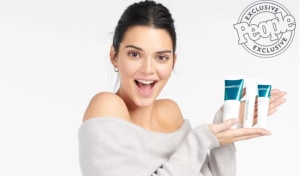 Skincare brand Proactiv has been accused of 'queerbaiting' in its latest advertising push starring Kendall Jenner.

The campaign by Proactiv began over the weekend with Kardashian/Jenner matriach Kris Jenner sharing a tweet praising her daughter for being “so brave and vulnerable” in a then-unspecified interview.

Speculation soon ran rife about what Kendall would be revealing with some speculating it could be about her sexuality.

Promoting the skincare product, Kendall shared a video of how she had dealt with having acne on the Golden Globes red carpet last year.

But the personal story fell flat with her fans, who accused the model of overhyping the announcement and "queerbaiting".

So Kendall Jenner’s big announcement is about her skin and basically a Proactiv endorsement? GURL pic.twitter.com/sepefMrgRz

NOT here for kendall jenner’s announcement being that she’s the new face of proactiv. really??? you hyped me up so you can tell me you sell face washes now????????

This is the second major advertising campaign that has sparked backlash for Kendall with her infamous Pepsi ad having to be pulled after accusations it was racist.

It's also one of several occasions that a member of the Kardashian/Jenner family have been questioned on the authenticity of their sponsored social media posts, having previously come under fire for a lack of disclosure.

Proactiv is yet to respond to the backlash.