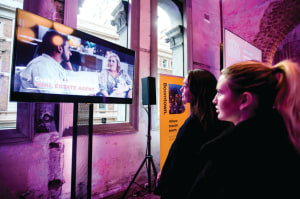 This first appeared in the AdNews August magazine. Subscribe here to make sure you get your copy.

Across Australia a marketing campaign is popping up in media agencies with the aim of selling regional media to advertisers.

Called Boomtown, it argues that regional consumers have a higher disposable income than city dwellers which advertisers are severely overlooking.

“When I first joined Southern Cross Austereo with Grant Blackley (SCA CEO) four years ago, one of the things we recognised from the very beginning is that regional is one of the biggest opportunities that we have in this company because the market is so underserved,” Gallagher says.

“We had a lot of homework to do, which we did in those first couple of years, and along that journey we were having great success going out to the market as SCA and boosting the regional media spend.

Former Domain CEO Antony Catalano, the man who tried to block the Nine and Fairfax Media merger at the last minute, re-emerged on the scene in April. Catalano purchased more than 160 regional papers under Australian Community Media from Nine, which it acquired as part of its takeover of Fairfax. Then News Corp Australia closed two community titles in Queensland.

The year so far has been difficult for TV, with Prime Media Group describing the advertiser sentiment in regional advertising markets as “soft”, with total advertising revenue for the financial year to May down 5.9% on the year prior.

“Regional advertising markets are challenging,” its CEO Ian Audsley said at the time, “The recent launch of the Boomtown campaign, which highlights the growing opportunities for advertises in regional Australia, has been well received in the market. It is early days, but the efficiency of regional television advertising that reaches 9.5 million regional Australians is a compelling story that cannot be ignored,” he concluded.

However, despite these sell-offs, closures and shrinking newsrooms, SCA’s Gallagher argues regional has plenty of untapped value and Boomtown’s core mission is to educate media agencies on this through its pop-ups.

So far, Boomtown has visited agencies such as Phd, Mediabrands, Carat and GroupM to host sessions encouraging planners to give regional a better look in.

Speaking to people within media companies, the reason regional doesn’t receive a fair share of advertising dollars, allegedly, is because there’s a bubble forming around agencies in Australian cities.

“The pop-ups have been going fantastically well because they’re really targeted at the mid and junior level in agencies where a lot of these people might not have been directly exposed to the opportunity in regional,” Gallagher says.

“The senior players are all quite aware of the opportunity. While they need a bit of reminding from time to time, they have been exposed to all this information before. It’s the mid-level strategist, buyers and planners who really need that information.”

News Corp’s Group Sales Director Heidi Sayers, who has focused on regional for the past five years, also alludes to this bubble in the advertising sector.

“It probably has to do mostly with the fact that the majority of media planners and buyers live in a metro area,” Sayers says.
“So often, when it comes to thinking about planning, a regional buyer can find it quite challenging, so they will potentially just default back to what they know, and what they know is metro brands.

“Very rarely do we find a situation where we have media planners and buyers that are actually living and breathing the regional market. So yes, often it can be overlooked.”

Buyers living in the big cities are approached differently than their regional counterparts. Metro buyers need evidence, or “insights”, of regional’s value for their clients.

“Metro audiences are perceived to be more valuable due to perceptions about regional Australia that often simplify and overlook the wealth and diversity of its population,” Sayers says.

Boomtown comes armed to its agency pop-ups with these insights.

For example, according to the campaign five out of the 10 biggest online shopping postcodes in Australia are in regional Australia, regional residents spend more on their weekly grocery shopping than their metro counterparts, and with an average income for residents aged 25-54 at $93,000, and a lower cost of living, regional consumers have a more disposable income.

But perhaps the most striking statistic Boomtown puts forward is that despite 36% of the Australian population residing outside of metro markets, just 10% of national media budgets are spent regionally.

Finding a healthy regional market
The premise of Boomtown is that at 10%, the spend of regional advertising is too low, and should be boosted to a healthier figure. But identify what that number should be is difficult.

Regional media platforms aren’t as expensive as metro platforms, which Gallagher says means it can’t be a straight split of 36%, the population of regional. Instead he aims for somewhere in the 20%-30% range.

“You’ve got to take the longer view because you’re not going to shift your revenue around in five minutes,” Gallagher says.

“I think we’ll have a boost in share spend to regional media this year and then another boost next year, and the year after that. We’ll slowly get there, the Boomtown campaign has to be three to five year approach.”

Joanna Barnes, PHD’s Head of Trading in Melbourne, also says the approach of setting out a target percentage based on population size is too simplistic, but for different reasons.

“It’s not just a matter of what the budget is and what is the percent we should allocate to regional,” Barnes says.

However, Barnes still welcomes the Boomtown initiative, saying it helps repair the image of regional, which can be mistaken for quiet rural Australia, not the bustling towns of Newcastle and the Gold Coast.

“Media owners are doing their best to shift the perception of regional,” Barnes says.

“The first thing they talk about is, we’re not a farm, we’re not rural. They also need to come back to how they’re positively impacting client ROI and what they’re bringing to the attribution model. It really comes back to client results.

“Their metro counterparts aren’t more sophisticated, but the conversation is different. They’re ahead of the market in terms of talking about client conversion rates. Boomtown is definitely a step in the right direction to do more of this.”

Regional Australia itself has been slowly modernising, and Barnes says naturally buyers will realise this over time.

“The shift is dramatic in the NBN rollout which is almost complete,” says Barnes. “The government focused on regional markets over metro purely because of its growth. There’s also infrastructure and a decentralised workforce. The support is there.”

While pushing against the idea that media agencies can live in their own bubble, she says Boomtown is limited in its ability to inject advertising into regional, and that a change within agencies needs to happen.

“Regional is very much a key consideration within our planning but there’s probably isn’t enough focus across other agencies,” she says.

“It’s definitely heading in the right direction in terms of awareness but it’s the agency model and how it’s done at a planning level that really will shift that.

“The media owners, through Boomtown, can help that as much as they can, but really it comes down to how the agency is factoring regional into their planning, and how they are looking at their client data and the ROI metrics.

“If they’re not doing that, then it will go back to x-percent of media dollars into regional which is an archaic model that we had back in the day when we didn’t have access to the data that we have now.”

However, she does recognise an unconscious bias among junior staff within agencies might exist.

“The younger generation might not be as familiar with the bus out in the suburban areas, or street furniture, so it’s unconscious bias that exists,” she says. “But if the agency has the right operating system and planning tools it removes all of that.”

Regionals pivot to subscriptions
Jason Scott, News Corp’s Managing Director for Queensland and the Northern Territory, is another believer in the metro bubble.

However, while Scott thinks regional is “severely under-represented”, he doesn’t think regional itself is suffering anything particularly dire compared to traditional media in metro markets.

“The percentage production in regional newspapers, in terms of journalists in the news rooms, would be no different to the metropolitan news rooms. So, don’t think it’s particular to regional Australia,” Scott says.

“We’re seeing a rationalisation, we’re seeing the impact of Google and Facebook on investment in journalism per se not just regional journalism.”

And like the metro publishers, the solution for regional is the same local, digital focus.

News Corp has been aggressively pushing into this space. In June, after cutting some 50 journalists who lacked the right “digital skills” it revealed plans to launch five digital-only publications.

In Canberra, News Corp is rolling out The Canberra Star, which will focus on all local news, save for politics, pitting itself against Australian Community Media’s The Canberra Times which is now owned by Antony Catalano.

The idea is that people living in towns beyond the big cities, such as Chinchilla, have no other source for local news other than their local publishers.

“So, the only place you’re going to find local content in Chinchilla, is in the Chinchilla News, which is one of the titles in our portfolio.”

This focus on local news is the path most publishers are following, and believe will help shift them from an advertising revenue based model to a subscription-based model.

“The really good news is that with hyper-local content that appears free in a newspaper you can also build a consumer revenue business through digital subscriptions,” Scott says.

“If I told you that five years ago, you would think that I had rocks in my head, but that is terribly exciting.”

Regional owners hopeful
Gallagher is optimistic that Boomtown is dragging the media planning conversation from a focus on platforms to a focus on markets, another factor that has played a role in the neglication of regional media.

The once concentrated advertising market has broadened, meaning there’s a lot more advertisers, but there’s also a lot more platforms for them to choose from.

“Back in the days, planners would be thinking about markets; east coast, Sydney, Melbourne, Brisbane, metro versus regional,” he says.

“In the last 10 years the conversation has been around platforms, should we be on social, what should we be doing on digital, how much of our money should be programmatic."

“That discussion has completely sidelined the conversation about regional markets.”

Gallagher is aware that Boomtown needs to promote a range of mediums to agencies, which is why it has radio, TV and print businesses onboard.

“Everybody has a place in the funnel if you like, and in regional markets some of the traditional media companies have been left out of that communication strategy, that’s a negative for brands.

“TV has the best client base but it’s still undercooked, while radio and print in regional markets have got a lot of opportunity. While TV is probably slightly ahead of the curve, I’m not going to tell you it’s enough because it isn’t. We need more and we deserve to get more, there is something in it for everybody.”