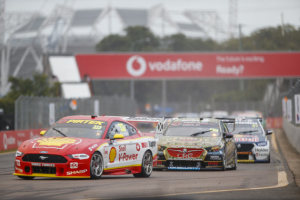 Vodafone
Dentsu Aegis Network-owned media agency Carat has revealed that it has been appointed as Vodafone’s global media buying agency. The scope includes media buying across multiple international markets, partnered with Vodafone’s in-housed biddable media team. GroupM's bespoke ‘Team Red’, which was set up in 2017 to service the account after the global telco shifted its buying and planning out of Bohemia following a seven-year stint, will retain the account. AdNews understands Australia was one of the only markets not to be included in the global shift.

McDonald's
McDonald’s has appointed indie Wieden + Kennedy New York (WKNY) as lead creative agency for its US business with 14,000 restaurants, the largest market for the fast food chain. The announcement comes after an evaluation of its marketing agency model, signalling a new approach after three years with Omnicom Group via We Are Unlimited, a bespoke agency created by DDB in Chicago for the account. AdNews understands the appointment will have no impact on DDB Sydney, which holds the McDonald’s Australia account. WKNY will begin work in the next month to plan for 2020.

Sealy
OMD Brisbane has been appointed to the media account for mattress company, Sealy. With five manufacturing plants and over 750 employees around Australia, Sealy is stocked by multiple retailers including Amart, Myer, David Jones, Freedom and Harvey Norman. OMD Brisbane will be responsible for all media strategy, planning and buying for Sealy. The appointment coincides with the relaunch of the Sealy brand, with the positioning of their innovative products as “It’s clearly a Sealy”.

Greater Bank
Australian independent media agency Atomic 212 been re-appointed to the media advertising account of Greater Bank. Atomic 212 previously held the Greater Bank account for three years until 2016. Greater Bank’s head of marketing and customer experience Matthew Hingston believes that Atomic 212 is a great fit for the bank and is looking forward to working with the team.

DoorDash
DoorDash, the largest on-demand food platform for door-to-door delivery in the U.S., has engaged Haystac, part of the BWM Dentsu Group, to launch its brand in Australia. DoorDash engaged the agency to mark its first market expansion beyond North America, following its success in over 4,000 cities in all fifty states across the United States and Canada. Haystac will use its expertise in PR, social and content to deliver an integrated communications strategy, including brand positioning, media relations, influencer relations and content development.