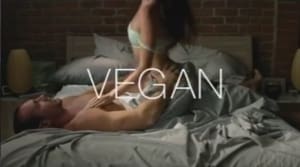 Warning: Mute your computer before watching this video at work.

People for the Ethical Treatment of Animals (PETA) has released its new commercial for the Super Bowl and we were not prepared for 40-seconds of vegan sex which apparently involves a whole lot of moaning and several sex positions.

Each year the animal welfare organisation creates an ad that is too raunchy for TV and instead releases it online, hitting viral status quickly. This has become a successful strategy with the ad receiving as much coverage for being turned down by the NBC as it would if it were featured in the Super Bowl 50.

The clip shows two couples, one with a meat eating male and one with a vegan male. We won’t go into too much detail but let’s just say the vegan’s partner seems a lot more satisfied than the carnivore's.

The text reads: “Sleeping with someone who eats meat? There may be more than one disappointment in store. Eating the saturated fat and cholesterol in meat can increase the risk of developing heart disease, high blood pressure, and high cholesterol, and these can be dangerous to your love life. Why? Because they're all common causes of erectile dysfunction.”

The ad has been viewed close to a million times in three days, and has provoked comments like this from viewers:

If this doesn’t get men to go vegan, I don’t know what will.

This is the eighth PETA ad to be banned from the big game. One of the most well-known banned ads, Veggie Love, showed some serious sitophilia (people who are sexually attracted to food) with women rubbing broccoli and asparagus over their bodies. Clips from Bud Light and SodaStream have also been banned in previous years.

Have you seen the 2016 Super Bowl ad teasers? We’ve got the latest from Pokemon, Butterfinger and more here.